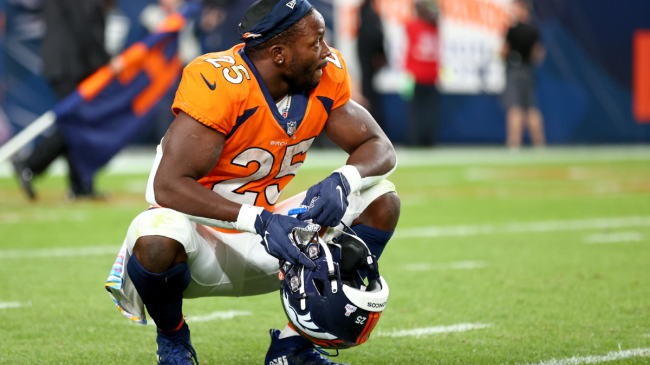 A local Denver broadcast crew took a moment to apologize to viewers after the Broncos-Colts game on Thursday night. Admittedly, it was an absolute snoozer as Indianapolis won 12-9 in overtime.

Neither team was able to reach the endzone, which made at least one bettor very happy when the game ended. But for most of us, it was three hours of boredom.

Things were especially bad for Broncos fans who watched their team give the game away in the fourth quarter of play.

Leading 9-6 in the final three quarters of regulation, Denver controlled the ball in their redzone with a chance to extend that advantage. Rather than keep the ball on the ground, the offense put the game in Russell Wilson’s hands.

He threw a pick in the endzone, and the Colts quickly drove the field for a game-tying field goal. In overtime, the Broncos saw yet another chance to win, marching down to the five-yard line.

Trailing 12-9, a touchdown would’ve given the Broncos a win. But on a fourth-and-one play, Denver again put the ball in Wilson’s hands. Russ missed a wide-open receiver, leading to an incompletion which effectively ended the game.

After seeing the ineptitude on offense, one Denver television station apologized to its viewers for having to watch the game before ripping into the team on the air.

A local television station in Denver apologized to viewers before annihilating the team on the air. Take a listen to what they had to say after the game.

“I feel the need to just apologize to the viewers… The fact that you had to watch THAT on our air, I feel bad. I was here and I didn’t even want to watch it. Where do we begin?”

After that opening apology, the crew ripped into the Broncos after what might’ve been their worst performance of the season.

“It burns the retinas, it was that awful. Both teams stunk offensively, but what was most shocking is that [The Broncos] were in position, as ugly as it was, to win the game… Then, Russell Wilson made two of the most facepalm throws he’s made in recent years… It just makes no sense.

“Then you get to fourth and one, season on the line, and they go out of the shotgun, which has not worked once in the redzone all year, and yet they do it again. It just defies logic, it really does.”

The decision not to run the ball, both on third down late in the fourth quarter and on fourth down in overtime, came back to haunt Denver. It’s going to be a tough loss to swallow for Broncos Nation.