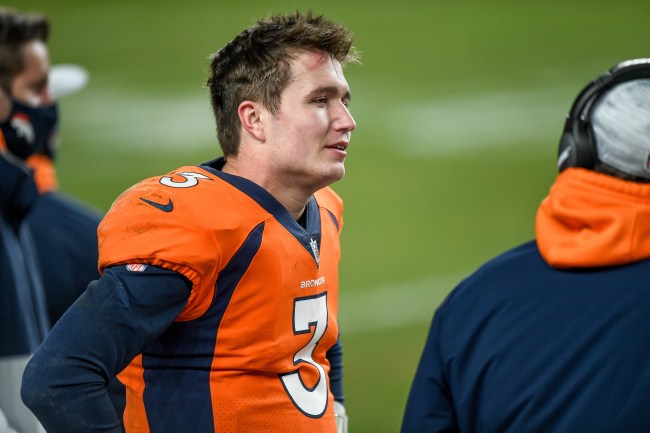 Drew Lock isn’t getting much love from his teammates as Deshaun Watson trade rumors are beginning to make their way to Denver.

On Thursday, Broncos safety Kareem Jackson, who played with Watson in Houston, says he talked with disgruntled Texans QB and he apparently told him that he’s interested in playing for the Broncos.

“I had a couple of conversations with him,”. “Just with him saying that Denver is a place that’s he’s interested in landing.”

Jackson went on to compliment Lock but said that any team that picks up Watson will automatically become contenders.

Drew Lock just finished year two, and we think highly of Drew, Drew’s a great guy, he’s great in the locker room and he has all the tools…so I’m not really sure about the interest from our personnel and our staff but I mean, if Deshaun Watson goes anywhere, they are automatically contenders”

Jackson isn’t the only Broncos player showing interest in having Watson join the team. Wide receiver Jerry Jeudy went on the Bart and Hahn radio show on ESPN and said it would be “exciting to have Deshaun” in Denver.

#Broncos Kareem Jackson isn't only one talking about Deshaun Watson. Jerry Jeudy when asked on @BartAndHahn about QB. "It would be exciting to have Deshaun Watson there. You know he’s a great quarterback. He’s had a great career at Houston. We are looking forward to a decision.” pic.twitter.com/TgIm4H2etA

It is worth noting that the Broncos were reportedly willing to part ways with Lock for Matthew Stafford just a week ago.

Source: The #Broncos made a run at trading for Matthew Stafford. They offered their 9th overall pick in the 2021 NFL Draft and Drew Lock. #Lions pic.twitter.com/6uOYrdpeDs

Broncos fans don’t seem to care that players are actively trying to recruit Watson while Lock is still the team’s QB.

If Drew Lock can't handle Kareem Jackson, Jerry Jeudy, or any other member of the Broncos recruiting Deshaun Watson he has one way to respond.

Breaking: Deshaun Watson is a better QB than Drew lock

Even more Breaking: players wanting the Broncos to get a top 5 QB will not result in locker room issues, it will simply be used by lock as motivation

If you want Drew Lock over Deshaun Watson. I have absolutely zero words