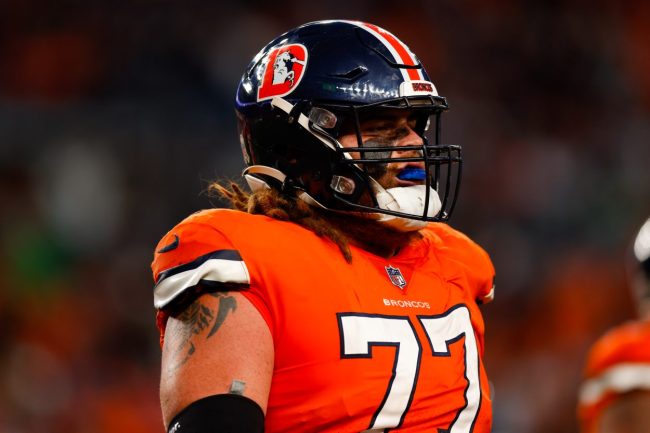 Quinn Meinerz might have been the biggest value pick of the 2021 NFL Draft. As a third-round pick, the 23-year-old rookie out of the University of Wisconsin-Whitewater has already cracked a starting lineup in the league and is making an immediate impact.

Meinerz, who stands 6-foot-3, 320 pounds, was not even ranked as a recruit out of high school. Due to his lack of interest, he ended up on the Division-III level and was absolutely dominant.

A look at the player we are interviewing today — Quinn Meinerz.

I fricken love this guy 💪💪 pic.twitter.com/SsdoeaikqD

Because the 2020 season was cancelled due to COVID-19, Meinerz spent the year training at his family’s hunting and fishing camp in Canada. His training regimen was unusual, to say the least.

The unbelievable story of Quinn Meinerz

Watch til the end pic.twitter.com/lmmKgr7uea

Because of his tape, as well as intangibles, he earned an invite to the Senior Bowl. While in Mobile, Meinerz immediately stood out.

Quinn Meinerz is making some 💰💰💰 this week pic.twitter.com/QcWQo9LF9M

After his performance in the Senior Bowl, the Wisconsin-native was invited to the NFL Combine and impressed again. His draft stock absolutely skyrocketed in a matter of six months.

Denver ended up drafting Meinerz and he immediately made his presence felt. He’s a real character.

Sign this man to a lifetime contract already. pic.twitter.com/9KvhdPYmuS

As it would turn out, his dominance on the collegiate level was no fluke. He has been a big part of the Broncos’ offensive line.

Although the team itself is not very good, Meinerz is.

His dominance was on full display on Saturday afternoon as Denver took on Kansas City for the second time during the 2021/22 season. Meinerz pancaked a guy so badly that he got up and took a swing.

Watch Meinerz, at the right guard position, block down on the defensive tackle before getting up to the second level. Once there, he blows up linebacker Anthony Hitchens and puts him into the ground.

After getting pancaked, Hitchens stands up and throws a punch. Meinerz is not phased.

Complete and utter dominance from a player you simply cannot root against.