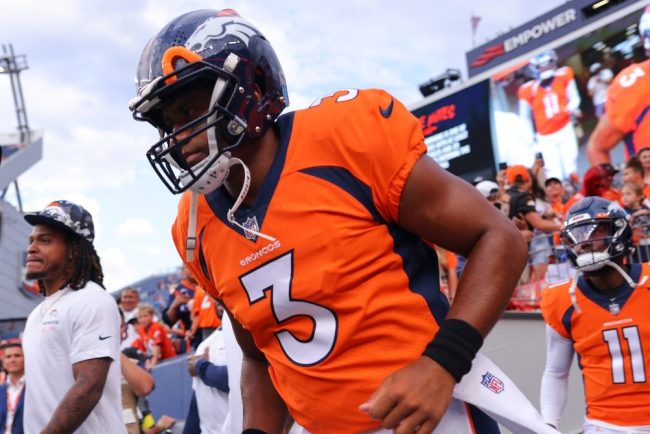 The Denver Broncos made one of the biggest trades of the offseason after acquiring Russell Wilson from the Seattle Seahawks. This franchise is set up nicely to make a deep playoff run this year, despite the AFC West being completely stacked. Even so, there’s one bonkers stat that proves why the front office targeted Wilson in the offseason.

Russell Wilson Brings A Crazy Winning Percentage To The Broncos

Denver has had it rough in the win column in recent years. Largely due to the revolving door at the quarterback position. On the other hand, Wilson joins the Broncos with a 65.8% winning percentage, per Fox Sports: NFL. He’s only had one losing season throughout his career so far and that was just in 2021.

How many wins will he get with the @Broncos this season? pic.twitter.com/krvwYHJiwf

For that reason alone, the Broncos have to feel comfortable entering the next football year. The offense has some nice weapons at his disposal which bodes well for their chances at success. Although they lost Tim Patrick, Russell Wilson will have Courtland Sutton, Jerry Jeudy, and Albert Okwuegbunam. On top of that, the rushing attack should be solid with Javonte Williams and Melvin Gordon leading the way.

Even though there is a ton of hype building around the Broncos, it’s still going to be a tough road to the postseason. The rest of the AFC West is loaded which will make things difficult. Although that’s true, Russell Wilson has the talent necessary to lead Denver back to the playoffs for the first time since 2015 when they won the Super Bowl.

Keep an eye on this franchise, as the Broncos aim to be one of the best teams in the league. If Russell Wilson can get back to his winning ways, then Denver will have nothing to worry about this year.