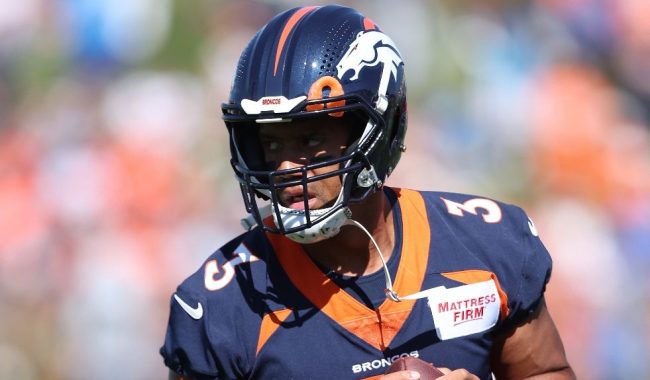 Russell Wilson has taken the sports world by storm after creating his “Let’s Ride” mantra after joining the Denver Broncos. It’s simultaneously awful and awesome at the same time. So much so that everyone keeps trolling him for it. Now, it appears the Auburn Tigers have joined in on the fun.

Auburn football shared a quick video of head coach Bryan Harin using his own version of Russell Wilson’s mantra. He does a perfect impression of the Broncos quarterback, as this will clearly pump up Tigers fans. It’s hilarious that nearly everyone jumping in on this troll job, as Wilson’s catchphrase has become wildly popular.

Even Spencer Rattler joined in on the fun and Russell Wilson even gave him props for it. At least the Broncos quarterback is light-hearted about it all, as “Let’s Ride” is becoming the new norm for hype videos. Auburn football will have its own version throughout the season, as Bryan Harsin nails it perfectly.

Although Russell Wilson receives plenty of flack for what he does off of the football field, he’s primed to have a monster year in Denver. They have a solid roster throughout and his presence gives the Broncos a legitimate chance to make the playoffs. They’ll have their work cut out for them though, as the remainder of the AFC West is equally as loaded.

Perhaps the “Let’s Ride” mantra will give Russell Wilson the strength he needs to overcome his opponents. Who knows, it could be the war cry we’ve all needed to hear on the gridiron.