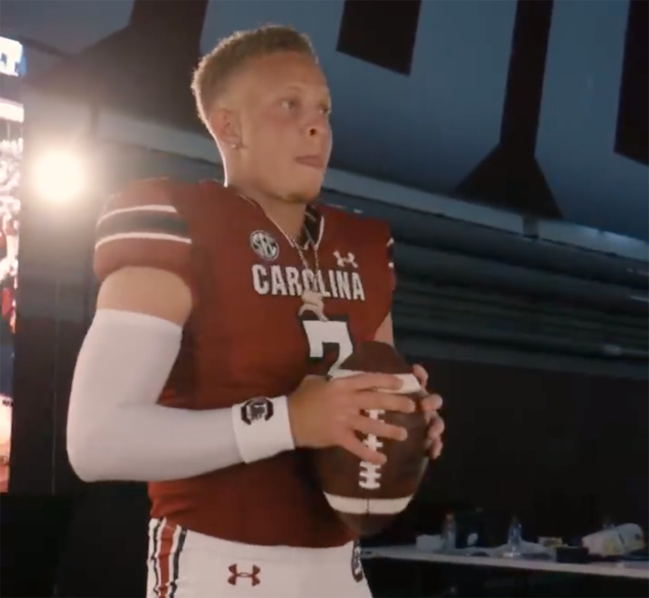 Russell Wilson is an incredibly cringeworthy dude. He’s a great quarterback, and by all accounts a great guy, but he can be incredibly corny.

And it doesn’t help that his new team set him up to fail earlier in the offseason. Fortunately for Wilson, he is able to laugh at himself and a video that the Broncos put out earlier this year has become something of a viral trend.

Back at the beginning of June, Denver posted a behind-the-scenes video of their new quarterback filming a promotional video. It shows Wilson’s multiple takes at looking in the camera and saying “BRONCOS COUNTRY, LET’S RIDE!” for the jumbotron in Mile High Stadium.

The video immediately exploded on the internet and has more than four million views. Wilson’s line is now infamous.

As college football teams gear up for their 2022 seasons, they are getting their internal media days done now before camp starts as early as the end of this month. In doing so, many of them are hopping on the viral trend that was started by Wilson.

College football teams are having their quarterbacks, or other star players, look into the camera and give their best impression of Wilson’s video, changing the verbiage from “Broncos nation” to fit their school. It’s laugh out loud funny.

West Virginia’s first-year quarterback J.T. Daniels got in on the spoof. As did Arizona State, FAU and Bowling Green, North Texas, Colorado State, Miami, Maryland, Kent State, Duke and many others.

(I even got in on the action.)

On Wednesday afternoon, South Carolina also took a play out of Denver’s playbook and had their new quarterback, Spencer Rattler, join in on the trend.

This is your fault, @DangeRussWilson

Wilson was impressed with Rattler’s impression.

When you put all of the videos together, it results in a hilarious compilation. It doesn’t miss!