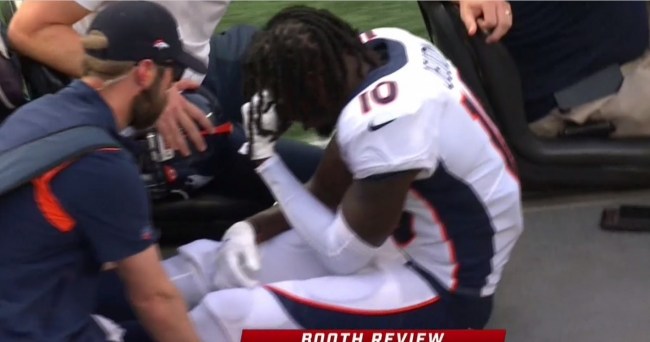 It appears that the Broncos will be forced to play a portion of the season without one of their main weapons.

On Sunday, Broncos WR Jerry Jeudy, who many predicted would have a breakout season this year, was carted off field after suffering an apparent ankle injury that looked very serious.

Jerry Jeudy has his ankle rolled up on BADDD pic.twitter.com/KdWv2LcIzb

Jerry Jeudy hurts his ankle and the cart is out. Ruling on the field is a fumble by Jeudy, Peppers recovers.

There’s no official word on Jeudy’s status but just from watching the video you can tell it doesn’t seem like he’ll be able to play anytime soon.