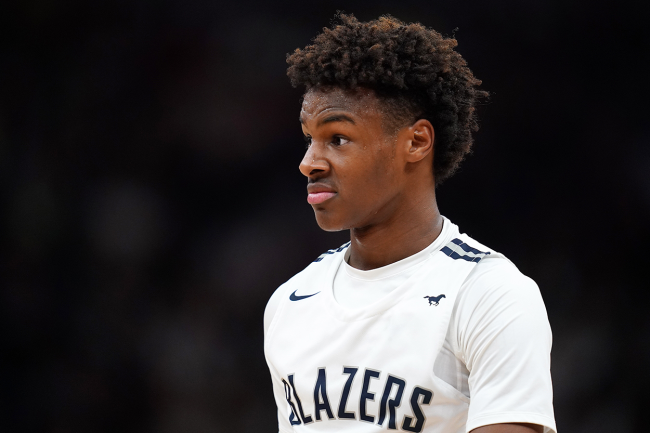 LeBron Raymone James Jr. is going to be an unbelievable basketball player. Better known as Bronny, the son of the greatest NBA superstar in history is set to follow in his father’s shoes over the course of the next decade.

Although he is in the Class of 2023, he is listed as a four-star recruit with offers from Duke, UNC, Kansas, and Kentucky. The 6-foot-3, 190-pound combo guard will be able to go wherever he wants when it is all said and done, and it’s not hard to see why.

Ahead of Sierra Canyon’s 2021/22 season, the Blazers hosted an exhibition, much like that of college programs and “midnight madness.” It’s an opportunity for the athletes to show off their athleticism with crazy dunks, three point contests, etc.

Bronny decided to let everyone know what’s good and threw an assist off the backboard to himself, and slammed it home windmill style. It was NASTY.

LeBron posted video of the dunk with the caption “Scary hours coming soon!” Take a look:

The craziest part of LeBron’s post is the screenshot. It shows Bronny with his head literally level with the rim.

After the video quickly went viral, fellow NBAers and celebrities weighed in. Among some of the comments:

If Bronny is doing stuff like this at 17, imagine what he is going to be doing in 5 years… GOODNESS.