Bronson Arroyo Has Made Over $95 Million As A Pitcher But He’s Still Using Gear From 1999?! 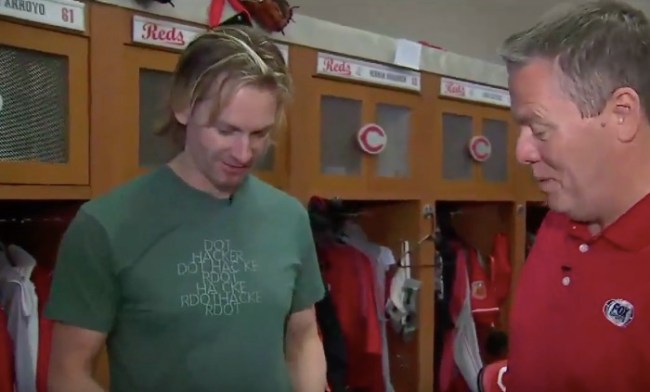 Bronson Arroyo has been sidelined with injuries and hasn’t pitched in the big leagues since 2014 when he was with the Arizona Diamondbacks for only 14 games. He’s currently out in Peoria, Arizona training with the Cincinnati Reds in Spring Training, trying to make it back to the majors.

FOX Sports Ohio caught up with Bronson Arroyo in the locker room to take a look at the gear Bronson Arroyo’s brought with him to Cactus League Spring Training. You’d think that a man who has made over $95 million in his career as a professional baseball player would be rolling into the locker room flossing the nicest gear money can buy, but not Bronson.

He told FOX Sports Ohio that he’s a creature of habit, and hates change. That’s why Bronson Arroyo is still using a fucking flip phone and sends text messages using T9 like some sort of hipster. Not only that, but the cleats Bronson Arroyo brought to Cincinnati Reds Spring Training are from 1999, and his glove dates back to 2003. There are actually two videos here, and I highly suggest watching both:

To put that in context, Bronson Arroyo’s cleats are old enough to vote, and the oldest pair of shoes I own might be 5 or 6 years old at best, and those are my tuxedo shoes. There aren’t very many things on this planet that Bronson Arroyo cannot afford. And in the world of baseball, he can get his hands on any piece of equipment his heart desires. Yet he decides to roll with a Kenny Lofton cleats from 1999. There’s something pretty amazing about that.