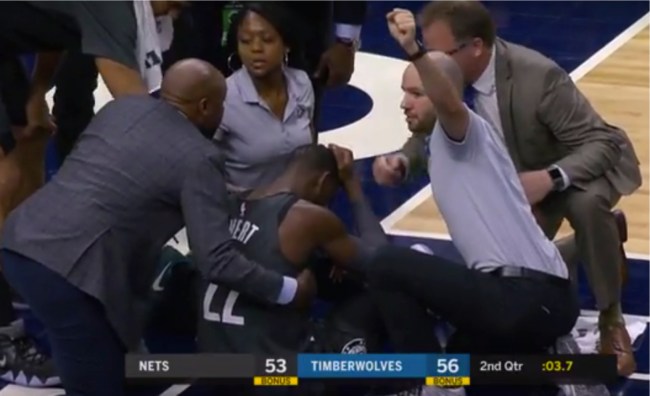 The NBA is a brotherhood, guys, you hear that time and time again. So when a player goes down with a nasty injury, it’s kind of cool to see the entire fraternity come together and offer up support to that injured player, with everyone understanding that, in a matter of one play, a career could end.

While big-named guys like LeBron James and other seem to be built like tanks, that’s not always the case. And one player, Brooklyn Nets guard Caris LeVert, unfortunately had an injury tonight that may be career-threatening. It’s so gross and horrid, that I’m not going to even show you it — but, given the description, think Kevin Ware with the Louisville Cardinals and Gordon Heyward of the Boston Celtics over the years. In fact, if you need a better description, here’s one from World Wide Wob on why not to watch it.

Do not watch the Caris LeVert injury.
Go out of your way to mute the words from appearing on your timeline.
I implore you.

Although there’s no full details on what LeVert’s injury actually is, early reports is that it could be season-ending, with the guard going down near the end of the first half tonight and forced to leave the floor on a stretcher.

Given the fact that, as mentioned, the NBA is a fraternity, here are some of the reactions and support on social media following the news of the nasty injury.

I HATE injuries! Prayers up for Caris LeVert!

This guy has been hooping!! its so tough to see that happen… Prayers up for @CarisLeVert 🙏🏼 Speedy recovery bro!!

Prayers out to @CarisLeVert!!! Been watchin him play this season and I’ve loved every bit of it! Hate to see him get injured 🙏🏾

Speedy recovery @CarisLeVert! Your career is just starting and I look forward to seeing you continue to play at a high level when you are ready to get back on the court. #NBAFamily 💪🏼

Prayers up for @CarisLeVert . Man was out there really serving daily 🙏🏽

Prayers for Caris LeVert. Hate to see this. Having a hell of a season. Keep strong 💪🏻💪🏻💪🏻

Prayers up for my guy @CarisLeVert. Hoping for a speedy and successful recovery. 🙏🏾

It hurts that much more cause I know how much you put into it! God will bring you through, that I know! Love you brother @CarisLeVert ✊🏾

Sight of Caris LeVert's leg injury in Minnesota shook everyone on court. He has rapidly emerged into the cornerstone player of Nets rebuild — and been spectacular this season. He fought foot injuries at U of Michigan. He's been everything they've wanted in a young player.

Currently in his third season with Brooklyn, the former first-round pick is averaging 19.0 points, 4.2 rebounds and 3.7 assists in about 31 minutes a game for the team. Here’s to a speed recovery for Caris LeVert, who has clearly balled out for the Nets this season, showing the team he could be a cornerstone of the franchise and a piece to build around in the future. It’s sad to see a guy doing that go down, so thoughts with the kid.