Brooks Koepka Caught On Video Getting Into It With Fan, Grabbing Guy’s Phone: Fans React 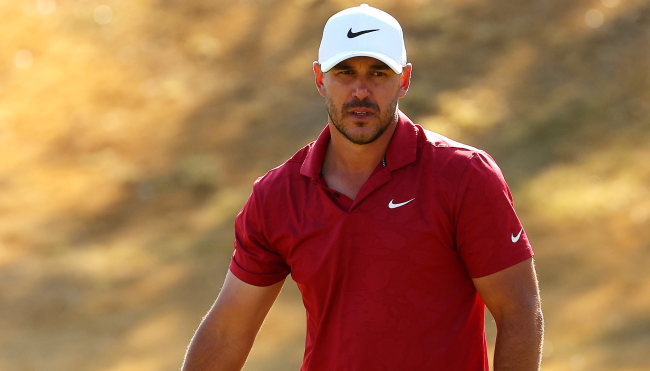 Brooks Koepka had a decent weekend at the World Golf Championships (WGC)-Dell Technologies Match Play event in Austin, Texas last weekend. He beat world number one Jon Rahm on Saturday, but lost in the quarterfinals to former world number one Dustin Johnson.

Still, Koepka’s big win ended Rahm’s 36 week run at the top, allowing Scottie Scheffler, the winner of the event to take over the number one ranking.

Not that he looked very happy about it when a fan who was trying to talk to Koepka and film him on his phone found out.

In the video, Brooks Koepka and his wife are tooling around in a golf cart when the fan asks him about his win over Rahm.

TMZ reports that Koepka actually took the phone from the fan, but the golfer’s manager returned it to him a few seconds later.

The fan reportedly wasn’t mad and didn’t pursue the matter any further, but this is the second time in two weeks that Brooks Koepka has gotten into it with golf fans.

The previous weekend, Koepka was asked for his autograph by a fan while he was walking on the range at the WGC-Dell Technologies Match Play event.

Koepka responded by paraphrasing a line from Tin Cup, “I’ve got to work. I don’t come to your job asking for your sh-t, do I? I don’t think so.”

As always, several fans on the internet reacted negatively.

Hey @nikegolf @Nike, not real sure having @BKoepka snatching phones out of fans hands, telling them to get out of his face, and telling fans that he doesn't come to their job asking for their sh*t is that good of a look for you. As a company, you may want to reconsider.

@BKoepka wow, looks like Brooks Koepka is an entitled, rude Dick. You should be nicer to the people who spend good money to watch you play. Being kind goes a long way.

Honest to god, what do this fans think is going to happen to their phones when the stuff them in peoples faces. Not advocating it’s right for them to do so, but how annoying would be to have a tough day and a fan just shoves their phone in your face