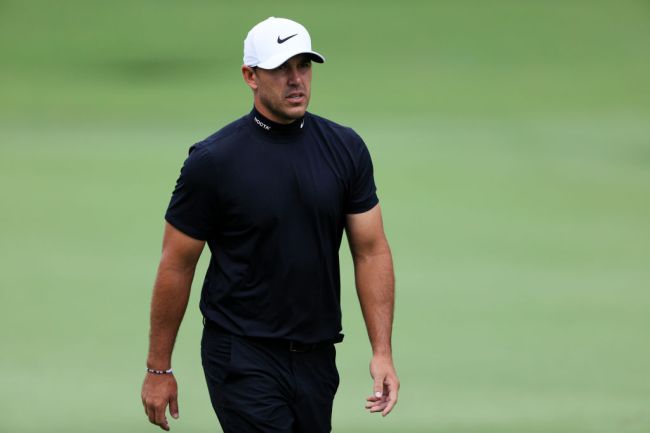 When you think about mock turtlenecks and golf, you think Tiger Woods. He and that red mock are as iconic as golf attire gets, so much so that when another golfer wears a mock turtleneck, it catches your eye. Very few people can pull off a mock turtleneck, let alone a short-sleeve one, but Brooks Koepka appears to be one of those select few.

Koepka rolled up to the first tee of the Tour Championship in Atlanta on Thursday wearing a black short-sleeved mock turtleneck. The shirt itself is a special one too, because not only is it made by Nike just like all of Woods’ were, but Koepka’s is a collaboration with Drake and his new Nike sub-label, NOCTA.

Drake’s new album ‘Certified Lover Boy’ is set to be released on Friday. Plus, various billboards popped up all over the country on Thursday announcing certain artists that will be featured on the album, so Koepka’s wardrobe choice certainly makes a lot of sense.

Personally, I dig the all-black look with the mock. The white hat to match the white shoes was a good choice as well, can’t have too much black on in Georgia’s summer heat anyway.

In Atlanta….in august…. What a doofus

turtleneck brooks is its own vibe

Black was the color of the day for Koepka and his crew as his fiancée Jena Sims showed up to the course wearing all black with their black dog as well.

Arriving in style for @PlayoffFinale. 🐶

So far, so good with the mock. Koepka made the turn at three-under on the day at East Lake.