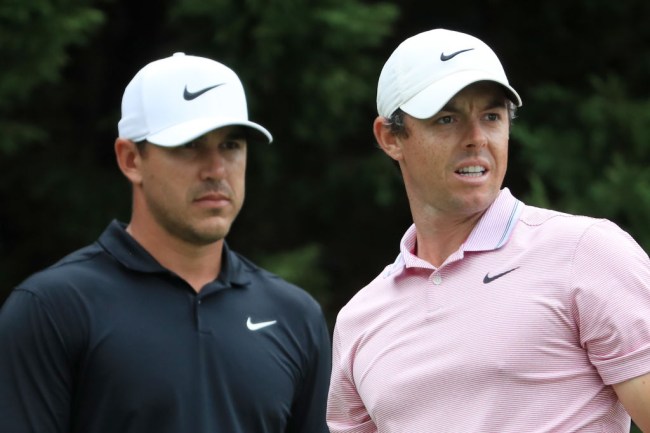 Last season we got to see Rory McIlroy and Brooks Koepka go head-to-head on Sundays. We saw Koepka beat McIlroy by six shots en route to a five-shot win at the WGC FedEx St. Jude in July. Then McIlroy returned the favor in the exact same fashion in the final round of the Tour Championship.

On top of seeing those battles last season, the fact Koepka and McIlroy are the No. 1 and No. 2 players in the world, respectively, Koepka being American and McIlroy being from Northern Ireland and the fact they are two biggest names in the sport outside of Tiger Woods, the idea of a legitimate rivalry between the two has been stirred up.

It’s pretty clear Koepka doesn’t see that being the case, however.

While talking to the media ahead of the CJ Cup at Nine Bridges in South Korea, Koepka got very honest and pointed out the fact that McIlroy hasn’t won a major since he joined the PGA Tour five years ago.

“I’ve been out here for, what, five years. Rory hasn’t won a major since I’ve been on the PGA Tour. So I just don’t view it as a rivalry.”

“I’m not looking at anybody behind me,” said Koepka.

“I’m number one in the world. I’ve got open road in front of me I’m not looking in the rearview mirror, so I don’t see it as a rivalry.

“Look I love Rory he’s a great player and he’s fun to watch, but it’s just hard to believe there’s a rivalry in golf. I just don’t see it.”

You can be the biggest Koepka-hater out there, but I don’t see how it’s possible for someone to not respect the fact that he never holds back with the media as this quote is a prime example of that; you have to love the honesty here. McIlroy is always brutally honest with the media as well; another reason people gravitate towards both players.

Koepka has won four majors and finished T-6 or better in his last 10 major championships. McIlroy may have won his second FedEx Cup a couple of months ago, but the Northern Ireland man hasn’t won a major since the PGA Championship in 2014.

If Koepka looks at those two resumes and doesn’t see any sort of rivalry there’s absolutely nothing wrong with that.

What’s interesting here is ahead of the Tour Championship, which again, McIlroy won back in August, McIlroy used a rival-like approach to the week saying Koepka is ‘going to have to go through me first.’

We’ll see these two non-rivals in the field of next week’s HSBC-WGC Championship in Shanghai, so that should be fun.