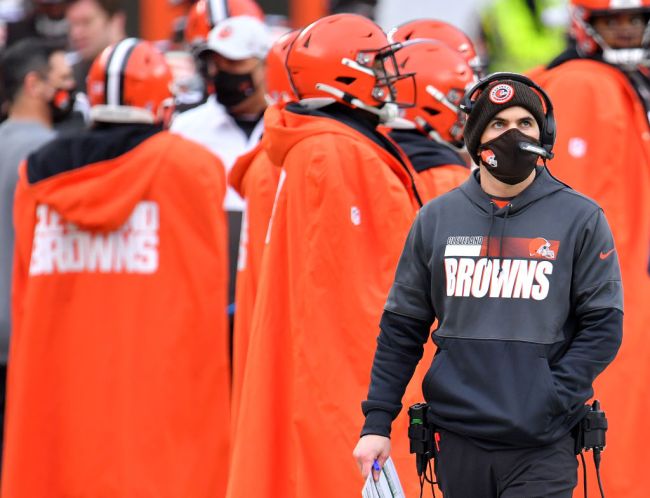 The Cleveland Browns have been impacted by COVID-19 in a major way over the past couple of weeks and now the team has announced that head coach Kevin Stefanski, two other coaches, and two players have tested positive. According to NFL Network’s Tom Pellissero, Stefanski is “out” for Sunday’s playoff game against the Steelers and contract tracing is taking place.

The #Browns–#Steelers playoff game remains on as scheduled Sunday night, source said, but the five in Cleveland who tested positive for COVID-19 today — including head coach Kevin Stefanski — are out. Contact tracing and genomic sequencing ongoing.

Cleveland.com reporter Mary Kay Cabot is reporting that one of the two players who tested positive is “significant” and that TE coach Dre Petzing and DB coach Jeff Howard must sit as well.

#Browns coach Kevin Stefanski is asymptomatic. He will coach virtually during week for #Steelers but must miss the game. TE coach Drew Petzing and DB coach Jeff Howard must sit. 1 of the 2 new players who tested positive is significant https://t.co/JY40WOWPsc

This isn’t exactly the news the Browns nor their fans wanted to hear just a few days before their first playoff game since 2002.

The organization put out a statement outlining its contingency plan explaining that special teams coordinator Mike Priefer will serve as acting head coach.

“The Cleveland Browns were informed this morning that Head Coach Kevin Stefanski, two additional members of the coaching staff and two players have tested positive for COVID-19,” the Browns announced in a statement. “Our facility is currently closed while contact tracing is taking place. The team will continue to consult with the league and medical experts to determine the appropriate next steps as the health and safety of our players, coaches, staff and the entire community remains our highest priority. Our contingency planning calls for Special Teams Coordinator Mike Priefer to serve as the acting Head Coach.”

Cleveland held off Pittsburgh 24-22 in Week 17 to secure its spot in the postseason, but now have to deal with a virus-related mess heading into this Sunday’s matchup.

The Browns and Steelers is the final game of wild-card weekend scheduled for 8:15 PM EST on Sunday night.