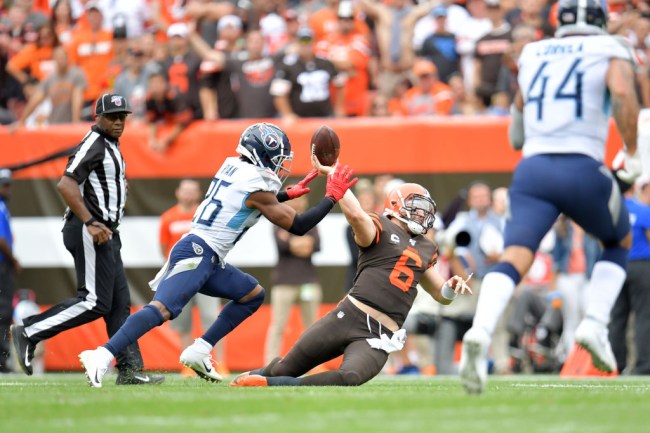 During the Browns’ season opener against the Titans, a fan was seen throwing beer on Logan Ryan after he took back an interception and leaped into the crowd. That fan is facing a lifetime ban for the Browns’ stadium after the incident.

This @budlight’s for you?@RealLoganRyan and the @Titans got doused by beer by a @Browns fan after the Malcolm Butler pick-6. 🍺 pic.twitter.com/mQ4QAO8ztM

As you can clearly see in the video a fan definitely throws beer towards Ryan and his Titans teammate.

According to ESPN, the Browns identified the wrong man in the incident and the man, Eric Smith, that was mistakenly identified has filed a lawsuit against the team and he’s got a pretty strong case seeing as how he wasn’t even at the game.

According to his attorney Bruce Taubman, Smith is seeking a public retraction from the Browns, in addition to financial damages.

During Tennessee’s win over the Browns in Week 1, Titans defensive back Logan Ryan was doused with beer after jumping the wall in the Dawg Pound. The Browns swiftly identified Smith as the culprit and, according to Smith, banned him from FirstEnergy Stadium.

The problem was, Smith wasn’t even at the game, and says he was DJing a wedding that day. The Browns didn’t disclose his name publicly, but Smith took to Twitter to say he had been misidentified.

According to the report the Browns privately apologized to Smith following the incident.

Imagine being Smith that Sunday. The Browns’ extremely hyped-up season gets underway with the Titans in town and you can’t make it to the game because you have to dj a wedding. The man probably didn’t even get a chance to watch the game, he checks the score later and sees his Browns got throttled and then gets falsely accused of throwing beer on players getting slapped with a lifetime ban.

That is quite the Sunday.