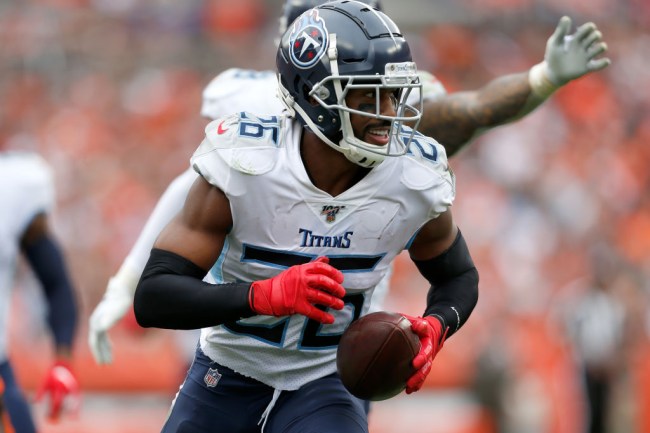 On Sunday, the Titans brought the Browns hype train to a screeching halt when they trounced Cleveland by a score of 43-13 much to the displeasure of the hometown fans, who booed the team off of the field after an incredibly underwhelming first half.

The loss was made possible thanks in no small part to Baker Mayfield, who threw three interceptions in the fourth quarter—including a pass that was picked off by Malcolm Butler, who promptly took it to the house.

Malcolm Butler picks off Baker Mayfield and takes it back the other way for a TD. That's the cherry on top for Mike Vrabel and the #Titans. pic.twitter.com/dDVwjz4hkl

Butler and a few of his teammates jumped into the stands to celebrate with a Titans fan sitting in the front row much to the chagrin of a Browns supporter who decided to douse Logan Ryan with beer, and based on a tweet he sent out after the incident, it’s safe to say the cornerback wasn’t too thrilled.

They can pour beer on us because we’re just athletes right? We’re just entertainment & since they purchased a ticket they can act how they want? 👀 @NFL @NFLPA @Browns @Titans https://t.co/fpCfEOhC1V

There were some people out there who somehow thought it was a good idea to place the blame on Ryan—including former Brown Joe Thomas, who said he brought in on himself.

Violation of league rules to jump into the stands as the visiting team: you should expect beer dumped on you every time (nobody would waste #73Kolsch by @GLBC_Cleveland, so expect piss water beer at that) https://t.co/2nH4OI6EsD

However, it appears the Browns have decided to side with Ryan, as Pro Football Talk reports the team announced the fan in question is facing a lifetime ban from the stadium for his actions.

This isn’t the first time someone has been barred from a stadium for pulling a stunt like this, as the Patriots previously banned a man who did the same thing to Tyreek Hill last season.

That’s what you get for wasting a perfectly good beer.