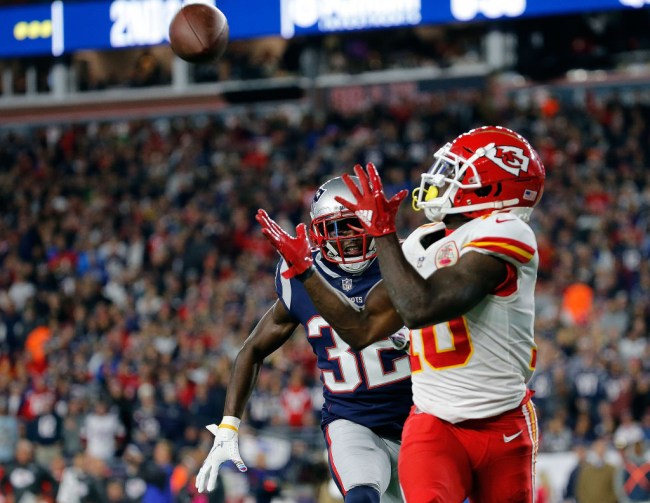 A New England Patriots fan threw beer on Tyreek Hill following a 75-yard fourth quarter touchdown that knotted the game up at 40, marking the best defensive effort made against Hill all night, who torched the Patriots defense for 142 yards and three touchdowns in a Chiefs loss.

After the game, the 24-year-old speedster said he wasn’t too bothered by the act. Via NESN:

“My coach (Andy Reid) told me, ‘Don’t get emotional. Don’t get mad about it because it comes with the territory,’” Hill said after the game. “I’m not mad at all.”

The incident has been shamed by NFL players and sports media, who are thirsting to discredit Boston fans after the city’s huge night, handing Kansas City its first loss and tying up the ALCS series 1-1 vs. the Astros.

The New England Patriots organization has identified the fan who threw beer on Tyreek Hill and claim to have snitched on him to local law enforcement and barred him from all future events at Gillette Stadium.

The “disinvite from all future events at Gillette Stadium” is more of a statement than it is an enforcement. I’m technically banned from Fenway Park after I ran onto the field in 2010 and slid onto the infield tarp during a rain delay (I have a strict rule not to interfere with play, I am a man of integrity). I paid a $100 trespassing fine and have been back to Fenway no less than 15 times since. Badass alert!

There needs to be a more public shaming for things like this. Maybe invite the dude to the next game and at halftime have him try to run goal line to goal line with someone teeing up on him with a paintball gun. I’d pay top dollar to witness that.