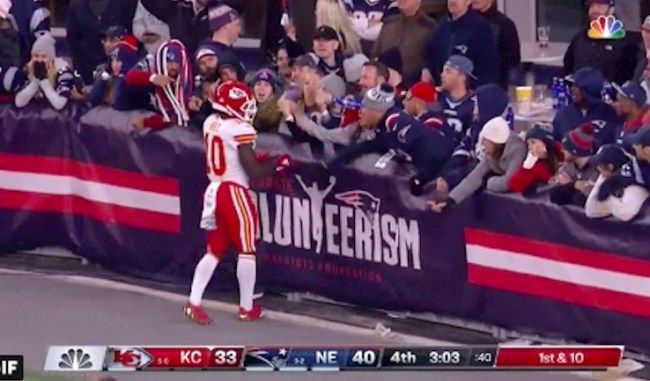 Several friends texted me last night to scold me for the actions of a select few who happen to root for the same team as I. Things like “Patriots fans are the worst fans in sports,” and “Boston going to Boston,” were sent my way, as if they expected me to defend a dude pathetic enough to throw beer on a player, never mind a $12 stadium beer.

I am of the firm belief that 55-65 percent of people are trash, ill-willed, just want to watch the world burn. That goes for my fanbase, hell, even a few of my friends. Hey Dale, you’re a bad person but a helluva drinking buddy. Trying to claim moral superiority based on devotion to a fanbase is like claiming the coziest room in the Manson household.

So let it be known that me, a Patriots fan, stands against evil in my fanbase and beyond. Especially in Philadelphia, lock away those neanderthals and throw away the key.

Now retired NFL running back Reggie Bush shared his thoughts on what went down in New England last night and inappropriate fan run-ins he’s had in his decade-long pro career.

Now if he smacked the piss out of one of you clowns you would be all over social media crying ready to sue him! Fans need to chill before somebody get hurt! You don’t have to like the opposing team but you need to show respect or don’t go! https://t.co/cdNy09AV4o

Facts! @NBA does a great job at this I have to agree @NFL needs to follow suit! https://t.co/AJAljDanRL

That’s mostly what I was referring to. I’ve been flipped off by little kids before standing right next to their parents also flipping me off! 😂😂😂 But beer is not acceptable… https://t.co/LbkdiG8zQv

I’ve had people throw things at me before and obviously yell crazy stuff which again is fine unless you hit me then we got action! I have to applaud @cheetah for NOT retaliating because that was some bullshit (excuse my language) https://t.co/aFpwWuP4bu

Bush was once together with Kim Kardashian, so you know he’s heard some shit from opposing fanbases. Honestly surprised more of these players don’t tee off on fans who refuse to recognize their humanity.