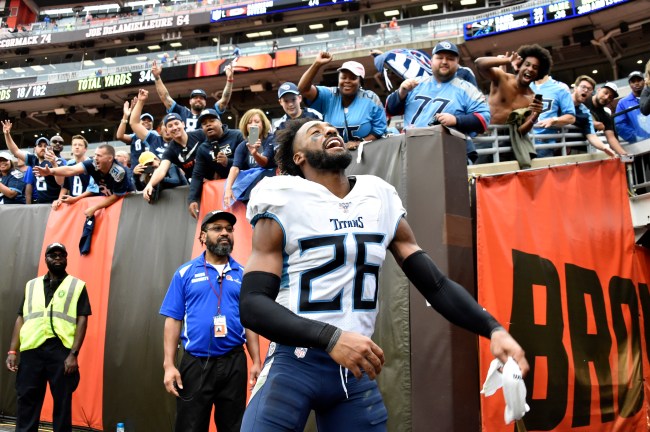 Logan Ryan had a dominant day against the Cleveland Browns in Week 1 of the NFL season. The cornerback didn’t only lead his Tennessee Titans in tackles with eight, but he also registered 1.5 sacks and intercepted a pass, helping guide the Titans to a blowout victory in Cleveland, 43-13.

While Ryan and his teammates completely embarrassed the much-hyped Browns, there was an incident in the Dawg Pound late in the game that some may not have noticed because, well, the game was all but decided at that point.

Following a pick-six by Logan Ryan’s defensive backfield mate, Malcom Butler, a fan wearing a Browns jersey could be seen dumping beer on a couple members of the Titans, who leaped into the stands to celebrate. After the video surfaced on social media, Ryan replied, rightfully calling out the jackass who dumped a beer on him and his teammates.

They can pour beer on us because we’re just athletes right? We’re just entertainment & since they purchased a ticket they can act how they want? 👀 @NFL @NFLPA @Browns @Titans https://t.co/fpCfEOhC1V

Nothing wrong here, right? Just a pro athlete speaking his mind about being treated like a piece of shit by, well, a real piece of shit fan, who thought it was his right to dump beer on Logan Ryan and his teammates because he paid money for expensive seats at a sporting event; I suppose — which has become an all-too-common theme at NFL games.

Unfortunately, because Twitter can be a nasty place, there were a bunch of ignorant people actually calling out Logan Ryan for, God forbid, jumping into the Dawg Pound following the defensive score, with some complaining there was no need for it because the game was already decided at that point. Just look at the type of moronic excuses that some actually tried to argue about on social media.

I hear you..but you did jump in the stands to taunt them …noooooo ?

Don’t jump in our stands then jackass🤣🤣🤣

You went into the stands. No fans came at you.

You jump into the insanely drunk crowd of the opposing team and expect to come out dry? Lol.

If this was the 1980's you would of had dog bones, D batteries, and all sorts of shit thrown at you.
When @ochocinco jumped into the dawg pound he got showered with beer. pic.twitter.com/bAgM7oym4f

You’re getting paid to play so you can just jump into the lap of two opposing fans? After a score that put you up by 30 in the 4th?

" I went into the fans area at an opposing stadium and am now complaining for not thinking of the potential consequences."

Yup. Disrespect us the fans by jumping into our stands we get to throw beer on you. No apologies for that. pic.twitter.com/JC4amY6DmL

We’ll stay off the field, you stay out of our stands. FOH

Remember, something similar to this happened last year during a Chiefs-Patriots game, when TV cameras caught a Pats fan deliberately disrespecting Kansas City wideout Tyreek Hill by throwing beer in his face. The fan was (thankfully) tracked down and suspended from ever going to another game in Gillette Stadium, which seems like the appropriate punishment for doing something this stupid.

Guys, as fans, we’re not entitled to a damn thing, so remember that. As much as the Browns were getting their asses handed to them on the field — and it deflated the mood in the entire stadium — having a fan do something like this only adds insult to injury. Being an idiot is a bad look, so here’s to hoping the Browns fan is tracked down and prevented from future games, because this is really dumb.