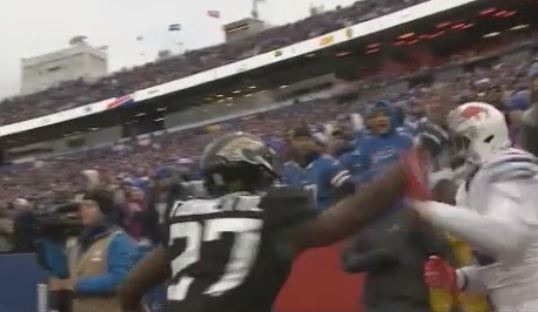 Leonard Fournette might have earned a one-game suspension for his involvement in a fight with Shaq Lawson of the Buffalo Bills this past weekend — which was one of the more wild brawls I’ve seen in the NFL in a long time — but the Jacksonville Jaguars running back actually kept his cool considering what happened to him on his way to the tunnel after being booted from the contest.

That’s because new, unseen footage just hit the Internet that shows Fournette getting drilled in the head by a beer can which, presumably, was thrown by someone part of Bills Mafia. Luckily, Leonard Fournette still had his helmet on, because the damage could have been pretty bad had he already taken it off. Take a peek at the video below, which was posted to Bleacher Report’s Twitter account after being sent to them from a fan.

After watching the video, it’s actually kind of surprising that Leonard Fournette didn’t pull a Ron Artest and go running into the crowd to cause an ugly scene, because he definitely could have done something similar. Thankfully, he either didn’t feel it or just ignored it, keeping his cool enough not to react.

This isn’t the first time that an NFL player has been nailed with beer in the past month or so, as Tyreek Hill of the Kansas City Chiefs had brew tossed in his face after scoring a touchdown against the New England Patriots earlier this year. It’s a reminder that fans think they can do anything they want to, but, c’mon, stop being F’in idiots, it’s not your right to throw sh*t at these guys, booing them should be enough.

Hopefully someone has details on the jackass who threw the beer and he/she gets banned from Bills games going forward, because, Bills Mafia or not, this is pretty ridiculous.