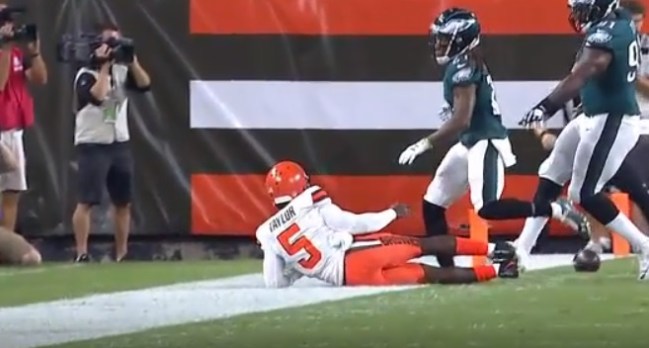 For the past few weeks the Browns coaching staff has made it clear that Tyrod Taylor was going to be the starting QB going into the season.

“He’s our guy and that’s what it is,” Zampese said of Taylor. “To keep bringing it up is the only reason why anybody would put a cloud in anybody’s head. So let’s get on with him being the guy and let’s get on to playing and winning and doing what we are supposed to do and what we are here for.”

It seems like the Browns’ plan to start Tyrod in the first game of the season was derailed tonight when Taylor suffered a brutal looking injury during tonight’s preseason game vs the Eagles.

Tyrod left the game to get checked on but the Internet felt terribly for the Browns QB.

On the final play of a drive, Browns QB Tyrod Taylor gets up in a lot of pain. Appeared to be either his left wrist or arm.

I believe Baker Mayfield should be the Browns starter. But I did NOT want him to "win" the job because Tyrod got hurt. Hoping he's OK. Did not look good.

Officially, the #Browns are calling it a left hand injury for QB Tyrod Taylor. He is questionable to return.

Update: Taylor made his way back to the sidelines.

Tyrod Taylor is taking snaps on the sideline.

#Browns Tyrod Taylor back out on the sidelines

Update #2 Taylor was somehow able to return to the game.

TYROD TAYLOR is BACK!!! pic.twitter.com/pS06HwcL6c