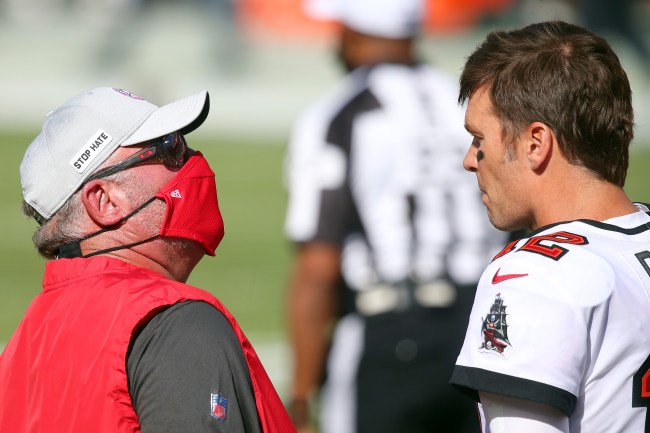 Bruce Arians and his Tampa Bay Buccaneers lost another heartbreaker Sunday, going down to the defending Super Bowl champion Kansas City Chiefs at home. While his team did show some fight in coming back from a 17-0 first quarter deficit, in the end, it didn’t matter, and dropped Tampa’s record to 7-5 on the season.

The entire season has been a difficult one for Arians and his team, to say the least. Not only did he and quarterback Tom Brady get put into a shotgun wedding after the six-time Super Bowl champ left New England for Florida, but, in losses, the head coach has thrown his future Hall of Fame passer under the bus numerous times, blaming Brady for missing throws and reading the wrong coverages. That’s led to reports of tension between the signal-caller and Bruce Arians — which is understandable given the public critiques.

Given the offensive firepower around Brady and a timely defensive unit, the Bucs have Super Bowl aspirations. So far, the team looks lost, and, for that reason, ESPN analyst Dan Orlovsky blames Arians.

On Monday’s Get Up, Orlovsky went in on the head coach, blaming Arians for a lack of creativity on offense, while also saying the team’s wasting the greatness of Brady. Take a look below at the impassioned rant.

“The Buccaneers offensively are the walking definition of insanity — doing the same thing over and over again and expecting different results. … The lack of play-action pass is something I’ve talked about for six weeks with this offense,” Orlovsky said. “Tom Brady, by every measure right now, is the second-ranked play-action passing quarterback in the NFL. It keeps him clean. It helps their offensive line (with) protection. It creates some of the chunk passes. They ran it five times yesterday.

“Right now Bruce Arians is wasting Tom Brady. He got served on a silver platter the greatest quarterback to ever play, and all you had to do was use him the right way. He’s completely failing Tom, and I’ve got fear that it’s gonna bury this football team.”

"Right now Bruce Arians is wasting Tom Brady. He got served on a silver platter the greatest quarterback to ever play, and all you had to do was use him the right way."

Look, Dan Orlovsky’s right here, but we all knew there’d be a learning curve for Bruce Arians and Tom Brady heading into this first season together. After all, there was no training camp or preseason games, meaning teams with big changes — like starting a new quarterback who, oh yeah, also happens to be the GOAT — were always going to be at a disadvantage.

While the reports of tension between Brady and Arians should be concerning, it’s not like a couple wins in a row won’t silence those rumors. Winning cures all.

The Buccaneers can still live up to the expectations many placed on them prior to this weird NFL season started. But it’s going to take the head coach and quarterback to get on the same page, and to start incorporating ways for the 43-year-old to use his strengths more often.