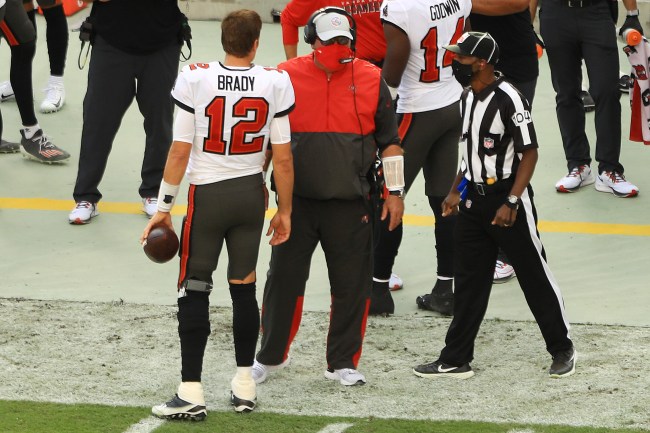 Tom Brady had one of his worst games of the season on Monday night and head coach Bruce Arians wasn’t shy to call him out on it.

During the Bucs game against the Rams, Brady went 26/48 for 216 Yards, two TDs, and two absolutely terrible interceptions where he appeared to misread the coverage.

BRADY GETS PICKED OFF AGAIN.

After the game, Arians openly threw Brady under the bus for not throwing the ball well and misreading coverage all night.

I thought [Leftwich] called a good ballgame,” Arians told reporters. “We just have to execute better. When guys are open, we have to hit them and we can’t misread coverage. We have to protect a little bit better when we do have guys deep and let [Tom Brady] hit that guy instead of having that pressure that cost us an interception. As a collective, everybody has got to play better.”

Arians on if dropped passes by the RBs are a problem: "“I’d have to look at Leonard [Fournette’s drops]. A couple of them were not really good throws, either. RoJo (Ronald Jones II) had a drop – we threw the screen a little quick – but no, I don’t think so whatsoever.”

If Brady continues to have terrible games like the one he had on Monday night the Bucs aren’t going to make the playoffs with a crowded NFC.