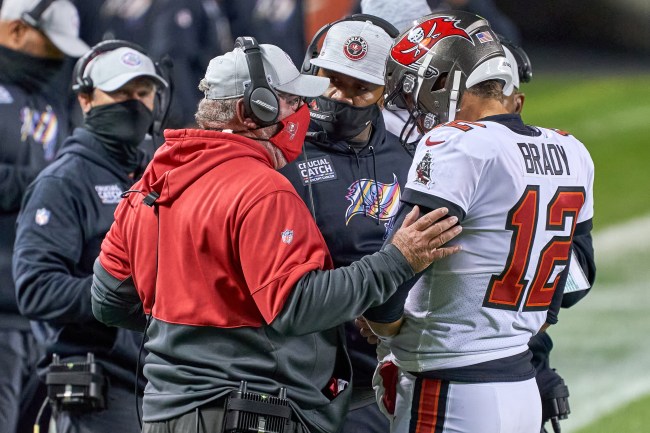 When the Tampa Bay Buccaneers signed Tom Brady this past offseason, everyone pretty much crowned them as NFC champs with a real shot at winning the Super Bowl. After all, adding a quarterback with six championships who has the reputation as the GOAT added a certain flair. It gave them confidence. It made them feel good inside.

Problem is, Brady didn’t know anything about his new head coach Bruce Arians. Like, seriously, the two didn’t meet until the signal-caller took his free agency trip down to Tampa, where the two talked shop and tried to put together a shotgun wedding. That can work in some cases — and it may still work with the Buccaneers this season — but, right now, things are a little awkward.

Look no further than Arians once again calling out his Hall of Fame quarterback after the team’s Week 11 loss to the Los Angeles Rams, with the head coach criticizing Brady for missing throws and reading coverages wrong. This seems to be a growing theme for Arians, who sure as hell isn’t coddling Brady like Bill Belichick and Robert Kraft did during the trio’s 20 years together with the Patriots.

While Brady’s competitive enough to take the criticism and is self-aware enough to push himself to work harder and be better, it’s clear that, at least publicly, there’s some relationship-building that still needs to happen between the quarterback and his head coach. And ESPN’s Dan Graziano further confirmed that with a report on Get Up on Wednesday morning, citing the growing tension that clearly exists right now.

.@DanGrazianoESPN is hearing rumors that the tension between Tom Brady and Bruce Arians might be real. pic.twitter.com/vXSAAgA2SA

Although the Buccaneers haven’t responded to Graziano’s report, it’d be hard to refute given the details from the ESPN reporter. From the forced marriage between Brady and Arians to the slow process of building a relationship to, as Graziano points out, the team literally bending over backwards to add players the quarterback wanted, the Tampa Bay organization has handed the keys to a player — albeit a superstar player — rather than its head coach. That often causes tension.

Brady wanted (and got) Rob Gronkowski. He wanted (and got) Antonio Brown. He has tons of weapons on the offensive side of the ball, and the Buccaneers defense is full of playmakers that feeds off a “bend and don’t break” philosophy, so they should have the pieces to compete for a Super Bowl. Whether or not that all comes to fruition this season, who knows? But if Tampa wants to live up to the expectations and hype many put on them after signing the GOAT, he and his head coach need to iron out some things first.