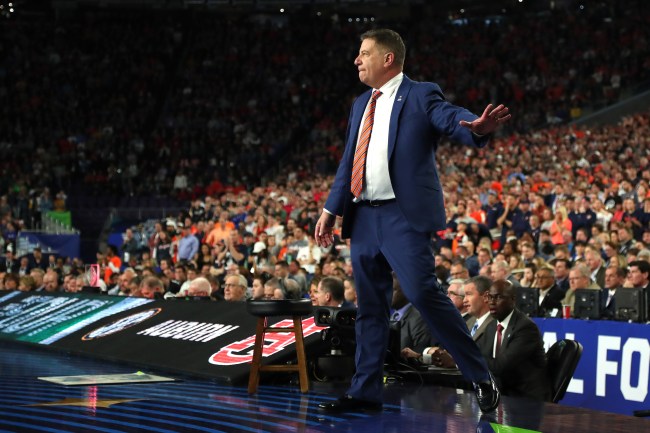 Bruce Pearl and his Auburn Tigers have every right to be full-blown pissed off after losing to the Virginia Cavaliers in Saturday’s Final Four. No, it’s not because they lost, it’s because of how they lost, which was, in part, because of missed calls by officials late in the game.

The most blatant call that officials got wrong came at the very end of the game, when Virginia’s Kyle Guy was fouled behind the three-point line with under one second left with the Cavaliers trailing by two at that point. Guy stepped to the foul line, buried all three free-throws and sent Bruce Pearl and his Tigers home crying in heartbreaking fashion. That call may be the one most people point to, but there were a few others — specifically a double-dribble on Virginia that refs missed, too — that could have changed the outcome of one of the biggest NCAA Tournament games.

Although Bruce Pearl, his team and Auburn fans have had a day or so to marinate things and have the Final Four loss sink in — so they might not be as irate as they should be — it’s still interesting to hear how calm and accepting the head coach is following the bad officiating mistakes. Just listen to the first-class comment Pearl gave on ESPNs Get Up! this morning while asked about referee mistakes.

"There is human error involved in the game … that's part of the game. Get over it."

Seriously, that’s incredible stuff from Bruce Pearl. He has every right to go in on the refs and claim that, because of a few missed calls in critical situations, his Auburn Tigers aren’t playing in tonight’s National Championship Game. Instead, he took the high road, and used it as an opportunity to teach his players and learn from his players about losing. That’s not easy to do, even if he is, deep down, feeling mad.

Bruce Pearl gets a lot of flack from people for some of his past decisions — which haven’t always been wise ones. But for him to take what happened in Saturday’s Final Four in stride and not point fingers are cry like a baby, which we saw in last season’s NFC Championship Game after refs missed that blatant pass interference call, really shows a lot about his character. Hopefully his Auburn team gets another chance at redemption in next year’s NCAA Tournament, and uses the Final Four loss as motivation to leave no doubt next year.