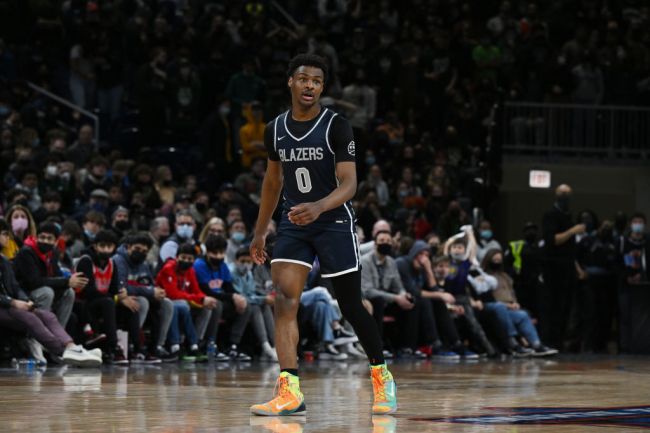 LeBron James’ sons Bryce and Bronny James are two of the biggest names in high school basketball. Today, that wasn’t nearly as important as the proud moment LeBron was able to enjoy.

Today, Bryce James and Bronny James played together in a game situation for the first time. LeBron tweeted about the moment and told fans how emotional it made him to see his sons playing together for the first time during their team’s trip to Europe.

Man I'm literally watching Bronny and Bryce on the court together for the first time in a game situation!! This is INSANE!! I'm EMOTIONAL AF!! WOW

Bryce and Bronny play for Sierra Canyon High School in California. The team is expected to be one of California’s best next season with Penny Hardaway’s son, Ashton, and Scottie Pippen’s son, Justin, playing alongside LeBron’s two sons.

Bronny is a highly-touted recruit heading into his senior season, currently ranking in the top 50 recruits in the nation. College basketball fans are still waiting to hear where he will decide to commit, but he is sure to get plenty of attention from scouts this year.

Bryce’s recruitment has yet to truly begin as he is a member of the 2025 recruiting class. Once he gets closer to time for him to actually commit to a program, he is expected to be one of the top recruits in his class.

If LeBron gets his wish, basketball fans could see him team up with one of his sons as well. James has said quite a few times that wants the chance to play alongside Bronny before he retires.

For now, LeBron will just get to enjoy watching his sons compete together in high school while the rest of the world wonders about where they will play college ball.