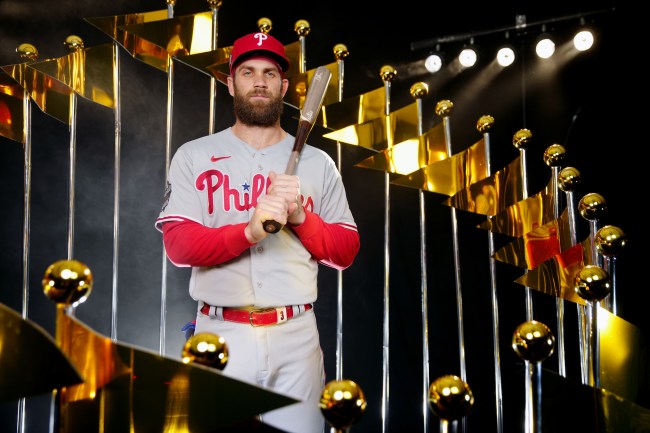 Bryce Harper’s to-do list after the Philadelphia Phillies clinched their first trip back to the World Series since 2009?

Bryce Harper had a career-defining, stand-out performance during the 2022 National League Championship Series. Harper has been on a tear during the Phillies Red October. He’s batting .419, slugging five home runs and 11 RBIs in just 11 postseason games. He’s already being immortalized with a mural in South Philly – a sure sign of a Philadelphia sports legend.

His two-run 8th-inning home run in Game 5 of the NLCS? Instant art for Phillies fans, already being heralded as one of the most iconic scenes in Philadelphia sports history.

This video has 4.5 million views and could win an Oscar.
pic.twitter.com/5RfVfInSCk

Before heading to Houston for Game 1, Harper was spotted doing a very normal thing before his first World Series appearance:

Grocery shopping at Trader Joe’s in New Jersey on a Tuesday afternoon.

Just a regular guy…shopping @ Trader Joe’s in Cherry Hill 2days after his home run that sent the Phillies to the World Series. WOW! This Phils fan tells us Harper was very nice, low-key, shopping w/wife & son. & Oh! She says Bryson Stott was there, too! Next@ 10pm @FOX29philly pic.twitter.com/hYh3k6atMp

Harper was spotted at the Cherry Hill Trader Joe’s by 19-year-old  Marissa Boutilier.

Bryce Harper: He’s just like the rest of us.

The star-struck fan captured a selfie with the 30-year-old Phillies slugger, telling Philadelphia’s Fox 29 it was her first time in a Trader Joe’s.

“I was looking around, and then we turned the corner, and I was like ‘oh my god, is that Bryce Harper,” Boutilier said. “It was my first time in Trader Joe’s, and I’m like ‘Am I in a different universe right now? What’s going on?”

“He was just walking around shopping with his son in the cart grabbing groceries like a normal person.”

“I turned the one corner, and I was looking eye-to-eye with him and I went up to him and asked for a picture, gave him a pat on the back and I said congratulations.”

This whole saga is like something out of a set-up to an It’s Always Sunny In Philadelphia episode. On one hand, it’s a little unchill to bother someone out there in the world just going about their day-to-day life, even if they are a hometown sports hero. On the other… It’s pretty cool to give someone daps on being said hometown sports hero. I don’t think it’s disrespectful to say “Hey, Bryce. Congrats!” when the entire Delaware Valley is draped in red and rooting for you. If you’re keeping it real, as a total stranger, it’s actually pretty cool to give the guy the recognition he deserves. That’s just fuel for the fire going into the World Series – that an entire city has your back.

It’s a throwback to 2021, when Bryce was spotted stopping for gas wearing his Phillies uniform.

Hey, Sometimes actual MVPs have to squeeze grocery shopping in before their biggest career moments.

Plus, if the Phillies want to keep dancing on their own this post-season, sometimes you need a couple of Trader Joe’s snacks to power through it.

a woman met Bryce Harper at Trader Joe’s and they put her on the local news. Love this city so much man pic.twitter.com/odq6XrmDH8