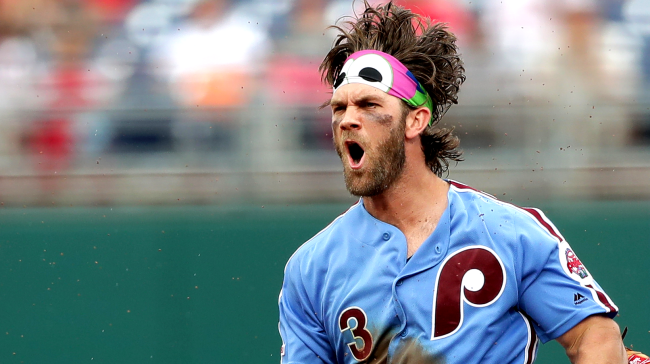 But seeing a celebrity going grocery shopping or grabbing some items at Target is far less jarring than seeing a professional athlete like Bryce Harper filling up the tank at a gas station while wearing his full Phillies uniform.

No, that wasn’t just some rando in a Bryce Harper jersey topping off at Chevron the other day, it really was Mondo.

The photo was taken and shared by Phildelphia Phillies prospect Bryson Stott on his Instagram story the other day with the caption “Tryouts at 6:35” like he was some high school kid and not getting set to play the New York Yankees in spring training later that day.

Stott can get away with having a little fun at Harper’s expense, despite being just 23-years-old and having never played above low A ball because he, like Harper and fellow MLB star Kris Bryant, is a Las Vegas boy and attending UNLV for two years before being drafted.

He also used some of his $3.9 million signing bonus to buy a new SUV for his mom for her birthday. What a good kid.