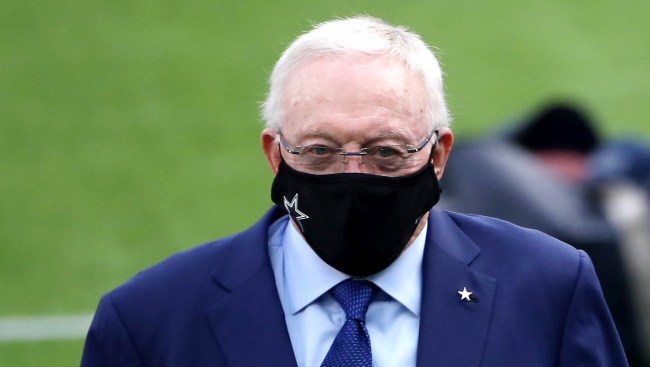 Jerry Jones is an easy guy to dislike. He’s rich, owns the Dallas Cowboys, … well, that’s pretty much it for reasons to dislike him. Other than that, dude is the best.

The older he has gotten, and the longer he’s been involved in the NFL, the more down to earth he appears to have gotten.

What other billionaire NFL owner do you know that hangs out, drinking with fans on Bourbon Street in New Orleans?

Plus, it’s just awesome when he gets testy on his weekly radio show.

He’s like a enjoyable movie villain. Especially with some of the completely nonsensical things he says.

As if that wasn’t enough reason to like the guy, this week a Kansas City Chiefs fan ran into Jones at a 7-Eleven in Prosper, Texas – population 22,517 – picking himself up a bottle of Josh wine.

Just met Jerry Jones at the gas station in Prosper. He even said he felt bad for Mahomes and Go Mean Green. #GMG #WeDemBoyz #ChiefsKingdom pic.twitter.com/ahuEBYFGGD

The Chiefs fan added that there was no way he was going to ask Jerry about the status of Dak Prescott because “there is no way I would have gotten even the slightest of a truthful answer and definitely would have had my picture opportunity struck down faster than you can scroll passed this tweet.”

Reactions to the photo were pretty great.

Lol this is exactly why billionaires are billionaires, Jerry still drinking regular wine from 7-11

Jerry drinking Josh wine makes me feel like a billionaire

Perhaps Jerry was on his way to Dak’s (he apparently lives in the area, according to numerous commenters) and didn’t have anything the bring with him, so he figured Prescott would be down for a little Josh cabernet. I mean, who wouldn’t?