In Not-So Shocking News, Jerry Jones Will Not Be Firing Himself As Cowboys GM Despite The Team Sucking 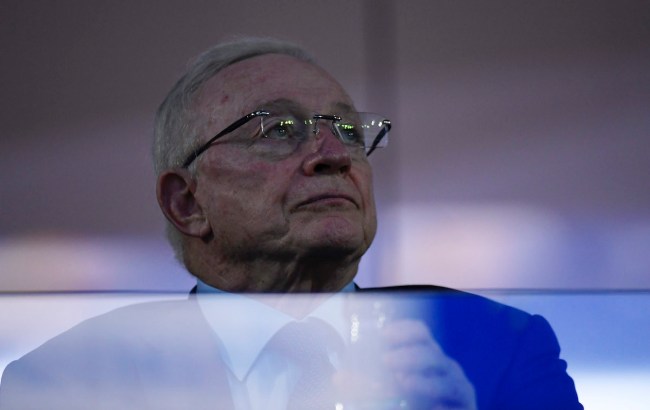 Back in 1989, Jerry Jones was just a mega rich guy who bought the Dallas Cowboys, which, at that time, were pretty pathetic after winning just one game during that NFL season. Fast-forward 31 years later and Jones has turned Dallas into the most valuable sports franchise on the planet, using his marketing, promotion and business skills to expand the whole mantra of being “America’s Team”.

Unfortunately, even with billions of dollars rolling in, the Cowboys haven’t seen much success on the football field, having made the playoffs just three times in the past decade, never advancing beyond the divisional round. That’s unacceptable to Jerry Jones, who measures his legacy with victories and championships. Whether that’s reality or not isn’t for me to say, because Dallas hasn’t won a Super Bowl since all the way back in 1996. That’s actually crazy to think about, but it’s still how Jones evaluates his franchise.

Given the 2020 NFL season has led to a dreadful showing by the Cowboys — currently sitting at 3-9 and in the basement of the pitiful NFC East division — some are wondering if there may be some changes to the team’s front office. After all, Jones himself runs the entire operation with the help of his family, with the billionaire having the distinction of being the team’s owner, General Manager and Team President. Look, when you write the checks, you can pretty much do whatever you want to.

But is the 78-year-old Jerry Jones thinking about maybe dropping one of those titles and handing over the reins to somebody else? Uh, no. That’s according to the man himself, who answered that very question during a recent appearance on Dallas’ 105.3 The Fan.

“When you work for yourself, there’s no firing him. You gotta change him. And he’s gotta change the direction he’s going. I’ve worked all my life for myself, but I’ve had to change directions many times. So, I will change. I can change.”

Cowboys owner Jerry Jones on @1053thefan: “When you work for yourself, there’s no firing him. You gotta change him. And he’s gotta change the direction he’s going. I’ve worked all my life for myself, but I’ve had to change directions many times. So, I will change. I can change.”

As a fellow entrepreneur, I appreciate the hustle of Jerry Jones here. I mean, the dude took the Cowboys from one win in 1989 to three Super Bowl titles within seven years, so he’s earned the right to do whatever he wants to with his businesses. Problem is, that was 30 years ago and Jones’ ego is way more inflated now because of those titles. It’s very similar to the current state of the Michigan Wolverines and USC Trojans in college football, with both relying on their past more than focusing on the present. Sorry, but players don’t give a damn about what happened before they were born.

NFL has flexed Week 15 Browns-Giants game to Sunday night on NBC. Niners-Cowboys moves to 1 ET on CBS. Jets-Rams kicks off that day at 4:05 ET on FOX.

Remember, this is the same Cowboys team that just got moved off primetime against the San Francisco 49ers in favor of the Cleveland Browns-New York Giants game. If that’s not a wake up call for Jones to understand the public perception of his franchise, what is? Just look at what one of the team’s all-time greats, Michael Irvin, recently said about Dallas being moved out of the nationally televised slot.

Michael Irvin on @1053thefan on the Cowboys getting flexed out of a prime time TV game in Week 15 for Browns vs. Giants: “Can you imagine, man, the Dallas Cowboys flexed out for the Cleveland Browns? Honestly, that’s a new low. That’s just absolutely a new low.”

It’s not Jerry Jones’ fault that Dak Prescott got injured. It’s not his fault that the locker room reportedly hasn’t trusted head coach Mike McCarthy or his assistants. It’s not his fault the defense has more holes in it than Swiss cheese. But it is his fault that it’s gotten to this point for the Cowboys, and, if he looked long and hard in the mirror, he’d realize Jones the owner would’ve fired Jones the GM years ago had he not been the same exact guy — problem is, he just won’t admit it to anybody else.