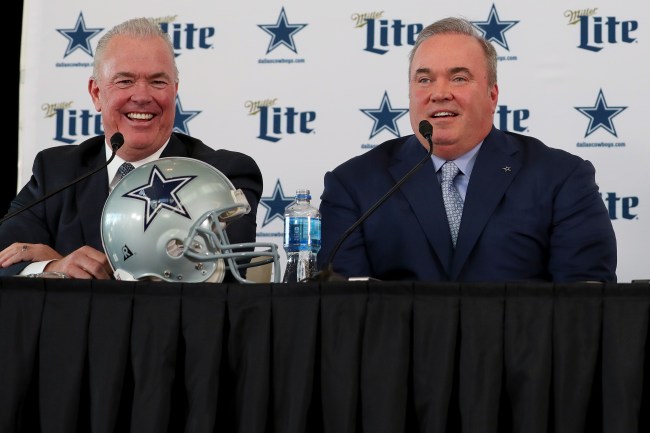 There’s no drama quite like Dallas Cowboys drama, and given the team’s dreadful start to this current NFL season, football fans are happily soaking up the serious dysfunction of “America’s Team.” Even prior to quarterback Dak Prescott’s injury a couple of weeks ago, the team was a mess, getting beaten on defense as if they stole something. And since Andy Dalton was put in as Prescott’s backup — before going down with an injury of his own in Week 7 against the Washington Football Team — the tension in the team’s locker room was turned up even more, as plenty of pundits were pissed off that Dallas players didn’t defend their signal-caller after a hit knocked him out. That also included head coach Mike McCarthy.

But what’s most hilarious about this Cowboys season is this: We’re not even yet halfway through this strange NFL season and we’ve already reached the point where the team’s front office needs to defend itself. That’s pretty much rock bottom. And it’s kind of sweet seeing Dallas go through it, I’m not going to lie.

After hiring McCarthy this past offseason, we’ve now got Cowboys V.P. Stephen Jones telling the media that he defends the choice, and that the former Super Bowl-winning coach is the right man to lead this franchise. With a record of just 2-5, this probably isn’t something most Dallas fans want to hear. Unfortunately, Jones is out here just trying his damnedest to show support to the leader of his franchise.

“I know we’ve got the right head guy for the job, and it’s a work in progress. . . . These things just take time,” Jones said. “I know our fans are frustrated. We certainly understand the criticism that’s come our way. But we’ve got to go to work. . . . It’s the first year with this group. You know Jerry and I are big believers in sticking with the staff. We’ve just got to give them their opportunity to work with these guys and continue to implement what they’re trying to get accomplished.”

Guys, anyone who knows anything about sports knows what this means. It’s basically Stephen Jones telling Mike McCarthy, “Look, we know you’ve been dealt a crappy hand by losing your franchise quarterback during a weird NFL season that has limited-to-no fans, so we believe in you… until you lose three of your next four games, two of which come against pathetic NFC East rivals.”

While Mike McCarthy has the support of the Dallas front office right now, life comes at you fast (especially in the NFL). So would anybody really be surprised if the guy gets axed should his team get steamrolled by the Eagles in Week 8 versus the Eagles and/or blown out by the Steelers the following week before the bye? No, it probably wouldn’t. Because that’s the point we’ve reached with the Cowboys, where they need to use the media to deliver positive messages to their head coach and the players. But don’t be fooled, because Offensive Coordinator Kellen Moore is lurking in the wings as a very probable option before the end of the season should things continue to go south.