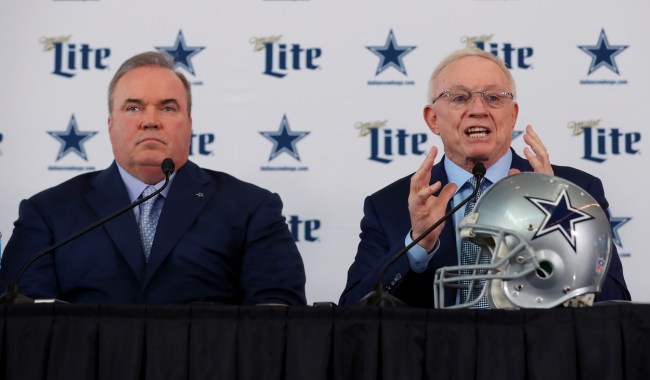 The more I watch him speak and interact with other human beings, the more I’m convinced that Dallas Cowboys owner and general manager Jerry Jones is not of this Earth.

My buddy from my suburban Jersey hometown (insert Bruce Springsteen guttural noise here) is a big conspiracy theory guy — loves to talk about a good clone, lizard people, all that jazz. And let me tell you, if there’s anyone out there that displays the characters of a lizard-clone-alien-hybrid, it’s Jerry Jones.

Take his comments during Mike McCarthy’s introductory press conference, for example, where he compared hiring the former Super Bowl-winning Green Bay Packers head coach to that time… his sister got a divorce? What?

“My sister explained to my dad one time when she was explaining why she wanted to divorce,” Jones said. “Dad loved her husband, and he said, ‘What’s gotten into you?’ And she said, ‘I don’t hear bells.’ He said, ‘Bells? Bells? I haven’t heard bells for the last 30 years.’ The bottom line is that is a dad trying to advise his daughter on the right move.

“But the bottom line is, I heard bells,” Jones said [via ESPN]

Folks, I’m no seasoned medical professional, but I’ve got to imagine hearing a ringing bell sound in your head is a symptom of a migraine, not a warning signal that you’ve found the right head coach. But, then again, this is how the human brain works — I simply can’t speak to the mental inner-workings of whatever alien species ole JJ is.

So welcome to the family, Mike — Uncle Jer loves ya like his sister’s ex-husband!