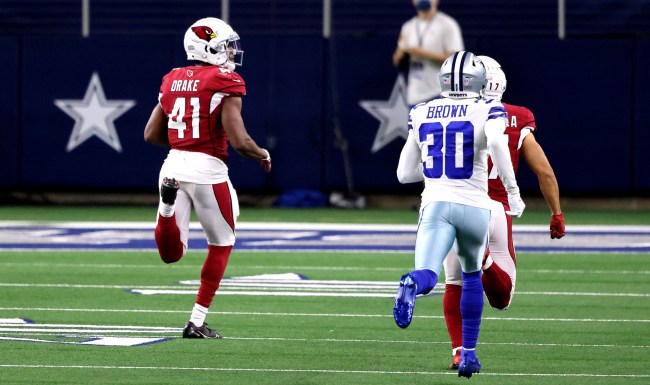 The Dallas Cowboys set a new record Monday night during their loss to the Arizona Cardinals. They are the first team to allow 34 or more points in five straight games. For the record, the Cowboys five opponents in those games were the Browns, Cardinals, Falcons, Giants and Seahawks.

On the plus side, despite allowing a league worst 36.3 points per game, the Cowboys currently sit atop the abysmal NFC East.

Have we tried putting the NFC East in rice?

So what does the man in charge, Jerry Jones, think of his team after six weeks of ineptitude?

Well, he’s not thrilled, but he’s still got his defensive coordinator Mike Nolan’s back.

During his weekly appearance on 105.3 The Fan, Jones tried to paint a rosier picture for his defense, pointing out that 84 of the 218 points Cowboys’ opponents have scored came off of turnovers so he’s still “okay” with Nolan.

“I like the way we came out last night defensively,” said Jones. “I thought we had a good plan for the skills of Murray and what the Cardinals presented us. I’ll be very candid, these aren’t excuses, but […] this defense has had a very difficult time with field position.”

As far as his new starting quarterback Andy Dalton, who went 34 of 54 for 266 yards with one touchdown and two interceptions, Jones sounded a lot less optimistic about his future.

“That was the pretty glaring difference out there last night,” Jones said in reference to Dalton vs. Prescott. “But it doesn’t have to stay that way.”

Jones added, “We can get the most out of our team and it could be enough with Andy Dalton. He didn’t last night. He contributed to the turnovers early. We had a play that could have been a turnover right off that would’ve been significant. But we can get there with Andy.

“He’s going to be challenged. I wish we had been in better shape protection-wise there, I wish we had a better run game and could get in better field position and better points in the game to work with.

“When Dak had those things, we did well. Dak was able to take us when we didn’t have those things and keep us in the ball game and get a couple wins.”

Multiple NFL analysts are now suggesting that Jones will make a move at quarterback, possibly trading for Sam Darnold or Ryan Fitzpatrick (now that he’s no longer the starter in Miami).

I expect the Darnold to Dallas rumors to heat up this week. Cowboys are still favorites to win the division and Jerry isn't going to just sit around. Jets are all in on the tank, and Darnold's market value is higher now than in March.

A 2nd should do the trick.

Considering that the NFC East is still very much up for grabs, who knows what Jerry will do.

When you realize the 2020 NFC East champion won’t even be bowl eligible pic.twitter.com/P5dq2TtpOy

Petition to move the Lions to NFC east.

fun fact: each NFC East team has 10 games left and they are all televised