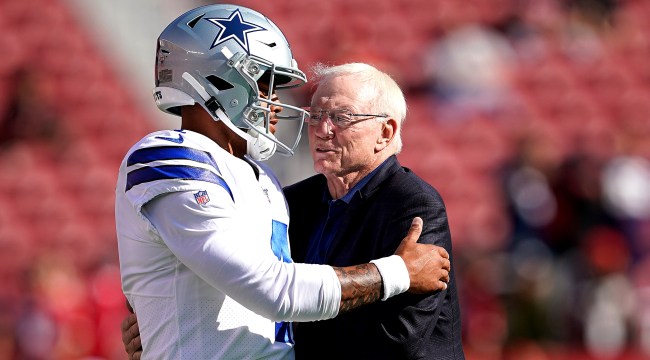 One of the first things NFL fans did after seeing Dallas quarterback Dak Prescott suffer a devastating leg injury on Sunday was to get on social media and rip Cowboys owner Jerry Jones for playing hardball and not getting a long-term contract done with his quarterback during the offseason.

Prescott was working under the franchise tag this season, which will pay him $31.5 million, but his future as a member of the Dallas Cowboys was already up in the air before he suffered a compound fracture and dislocation in the game versus the Giants.

Cowboys Vice President Stephen Jones went on record on Monday saying that Dak Prescott is still the team’s “future.” And while that’s nice, and Stephen’s dad, Cowboys owner Jerry Jones issued a very heartfelt message regarding Prescott’s injury, everyone knows that any final decisions regarding Prescott’s future in Dallas resides with JJ, not Stephen.

On Tuesday morning during his weekly appearance on 105.3 The Fan, the elder Jones echoed the sentiments of his son Stephen, replying, “none,” when asked how much Prescott’s injury alters his stance on Dak being the Cowboys’ quarterback of the future.

“Absolutely not. Absolutely not. He’s our future. He’s special,” said Jones. “If anyone can overcome anything it will be Dak. It’s something our doctors feel like he’ll overcome, and he’ll come back better than ever.”

Jerry Jones also addressed the contract issue that upset so many fans on Sunday.

“We’ve got to be reminded that to have a team, that we’ve got to really manage how we dole out our resources,” said Jones. “Dak is deserving of anything that you want to put on a piece of paper, relatively speaking. He’s deserving of that. If you evaluate what he can do to help us win championships, you can see that it’s there. Plus, he’s a leader at the premier leader spot. We’ve got to make it work. So what am I saying? I’m saying exactly the same thing I said the last time we were asked about this before the season started. This is part of the game, the business and the contract part.”

Jerry also gave an update on what doctors have told him as far as Prescott’s recovery timeline.

As for whether he has any concerns about Dak’s ability to bounce back from this injury, Jones said, “I don’t have any. I don’t really have any, at all. … It’s all positive, relative to a recovery. Nothing positive about it, don’t misinterpret, but it’s positive as to his chances of getting it back to normal. We’ve had similar injuries, you do this long enough and you’ve seen them. We’ve had similar injuries before and this is one of those that you can mend and come back and be as good as gold.”

Jones also doesn’t foresee making any major moves to bring in another starting quarterback to finish out the remainder of the 2020 season, saying it’s of “very little interest to me.”

“Certainly in the big scheme of things, to lose a player at this position like Dak, we’ve got to basically adjust,” said Jones. “Andy Dalton is a player that can get the job done in the NFL. He is a starting quarterback. I’m being trite when I say this, but I think he’s a starting quarterback on a very successful and winning team.”