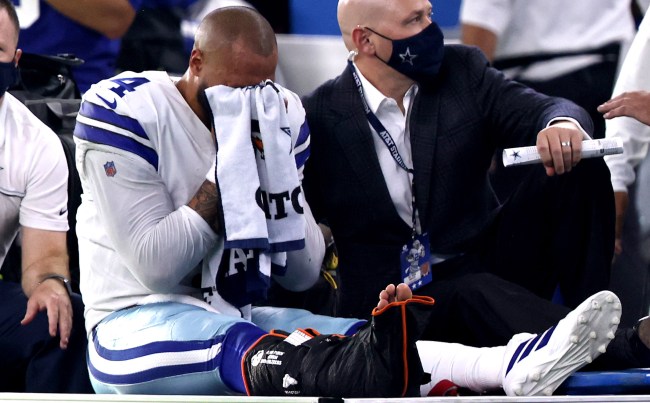 One of the first people who came out on to the field to check on Dak Prescott following his horrific leg injury was former Dallas head coach Jason Garrett who now serves as the offensive coordinator of the New York Giants, the Cowboys’ opponents during that game.

Jason Garrett coming out to check on Dak pic.twitter.com/5fmd5IvgWU

After the game, Garrett shared his reaction to Prescott’s injury, telling USA Today, “I really feel sad for Dak. He’s such a great player and a really special person! It just makes you sick. There’s no doubt in my mind that he’ll face this challenge head on and come back stronger and better than ever! He’s just getting started in his career. He has many great days and years ahead of him. Dak’s a true inspiration to so many and I put myself at the top of that list. I love him to death and just wish him a speedy recovery.”

Dallas Cowboys owner Jerry Jones, who came under fire following Prescott’s injury by fans who felt Dak was mistreated in contract negotiations this past offseason, also expressed his reaction to the 27-year-old quarterback’s gruesome leg injury.

“We are all heartbroken for Dak and this very disappointing injury,” Jones said in a statement. “The outpouring of messages that I have received regarding his setback speaks volumes to the respect and admiration that he has earned from his teammates, former Cowboys players and Cowboys supporters everywhere.

“I know the personal hardship and strife that he has faced, dealt with and overcome in his young life.

“And I know of no one who is more prepared, from the perspective of mental and emotional toughness and determination, than Dak Prescott to respond and recover from this challenge that has been put in front of him.

“He is an inspiration to everyone he touches. He has all of our love and support. And we have no doubt that he will return to the position of leadership and purpose that he brings to our team.”

Jones and the Cowboys did not sign Prescott to a long-term contract this past offseason, instead giving him the franchise tag, and Dak was making them pay for it before he got hurt, having completed 68 percent of his passes for 1,856 yards (371.2 per game) and 9 touchdowns along with three more on the ground and one receiving.

The Philly Special being used in a game between Dallas and New York? Makes sense.