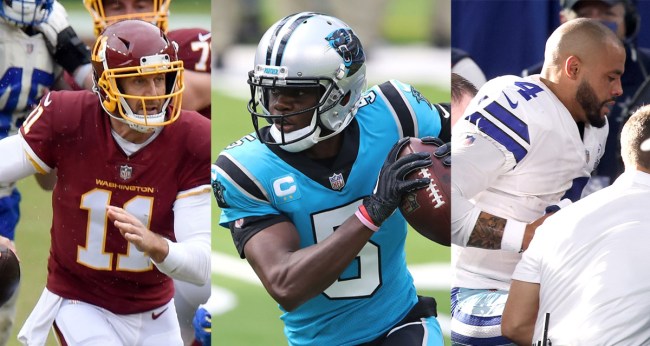 Carolina Panthers quarterback Teddy Bridgewater knows a thing or two about devastating leg injuries. During a Vikings team practice on August 30, 2016, Bridgewater suffered an injury to his knee that was so gruesome that several Vikings players reportedly felt ill and vomited at the sight of his injured leg.

There was speculation at the time that Bridgewater would never play in the NFL again.

However, not only did Bridgewater make it back and play once again in the NFL, he played so well for the Saints after Drew Brees got injured in 2019 that he signed a three-year, $63 million contract with the Panthers and this years has completed 73% of his passes with a QB rating of 101.3.

So on Sunday, when Cowboys quarterback Dak Prescott went down with a major leg injury, and Alex Smith, whose injury to his leg in 2018 was also so severe there was talk that, like Bridgewater, he could have lost his leg, made his triumphant return to the football field, Bridgewater knew exactly how each of them felt.

First, following the Panthers’ 23-16 win over the Falcons to move Carolina to 3-2 and into a tie for first place in the NFC South, Bridgewater took to Twitter to express how glad he was to see Alex Smith back under center for the Washington Football Team.

“So good to see Alex Smith take the field again,” Bridgewater wrote. “A blessing to be able to return after the journey you’ve been on over these past couple of years. Only you, your family and the ones closest to you truly what it took to get back, amazing. A true fighter.”

Unfortunately, the celebration of that good news ended up being tempered by the compound fracture and dislocation suffered by Dak Prescott.

“Praying for you @dak. I speak victory and healing favor over you during this time. You got this bra,” Bridgewater wrote.

NFL fans were quick to remind Bridgewater that he too is pretty inspirational and has overcome a lot to be where he is today.

You’re pretty amazing yourself Mr Bridgewater. I’m happy for your success in Carolina!

Nice to see you out there too Teddy. Good luck the rest of the season.

If anyone knows, it's you. Love you Teddy, and we miss you on the Saints. Keep killing it!