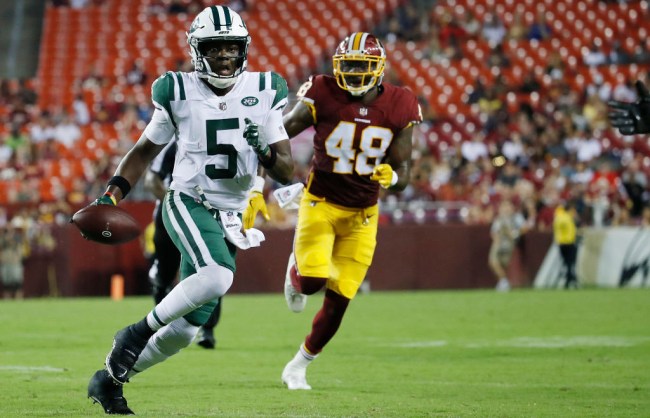 When current New York Jets quarterback Teddy Bridgewater went down with a horrific knee injury during a Minnesota Vikings practice in 2016, the prognosis for his recovery was pretty grim.

The damage done to Bridgewater’s knee was so harrowing that several Vikings players reportedly fell ill and vomited at the sight of the quarterback’s injured leg.

In fact, the non-contact injury to Bridgewater’s knee was so brutal that if not for the quick and effective action taken by the Vikings’ training staff, Bridgewater may have actually lost his leg.

Fast forward a couple of years and despite the fact that there was speculation that Bridgewater would never play in the NFL again, he has, in fact, not only made it back to play for the Vikings in a regular season game, he’s also looked pretty darn good this pre-season.

Bridgewater even went so far as to tell the media after going 10-of-15 for 127 yards with a touchdown and a pick against Washington that he wanted to get hit.

More Teddy Bridgewater (@teddyb_h2o): "I could have thrown the ball away or run out of bounds, but I wanted to challenge myself & see if I could take a hit. It was fun. Get up, smile, tell the guys, 'Hey, that was nothing. Next play.'"

Teddy Bridgewater (@teddyb_h2o): "I just wanted to get hit. I don’t know if it’s the right thing to do or say as a QB, but for me, it’s just continuing to knock down that mental block."

This week, Bridgewater’s surgeon Dan Cooper, the Cowboys’ team physician, with the permission of the quarterback, revealed to ESPN’s Ian O’Connor more specifics about the knee injury and just how bad it really was.

Amputation was no longer a feared possibility, and yet what the surgeon faced that day was something one might see on the set of a sci-fi film.

“It was just a horribly grotesque injury,” Cooper said.

The good doctor was talking about the quarterback’s left knee, which had exploded without warning nine days earlier while Bridgewater was dropping back to pass, untouched, in a Minnesota Vikings practice.

“It’s mangled,” Cooper said. “You make the skin incision, and there’s nothing there. It’s almost like a war wound. Everything is blown.”

Cooper continued, “This surgery was an absolute gut test, a test of what you’re made of, and I’ve seen it break people down. I never saw it break Teddy down. … Most people have no idea the volume of the workload this kid had to put in. He had a toothpick of a leg he had to rebuild.”

Bridgewater was referred to Cooper by former Cowboys coach Bill Parcells, who has become a big fan of the QB since they first met while Teddy was prepping for the NFL Draft in 2014.

“This was a very, very serious injury,” Parcells told ESPN. “It wasn’t just, ‘Oh, well, he had knee surgery.’ Trust me.”

How serious was it? Check out all the damage that had to be fixed, according to Cooper.

“But it’s certainly the worst knee dislocation in sports I’ve ever seen without having a nerve or vessel injury,” Cooper said. “It’s an injury that about 20-25 percent of NFL players are able to come back from. … It’s a horrific injury. You’ve torn every single thing in your knee and it’s hanging on by one ligament on one side like a hinge.”

The rumor mill is currently rife with reports that Bridgewater might get traded from the Jets at some point soon, but that isn’t his main concern right now.

“I am blessed with the opportunity to continue to do what I love to do,” said Bridgewater. “That’s what’s most important to me right now. Just waking up every day knowing that I get to continue to play football.”