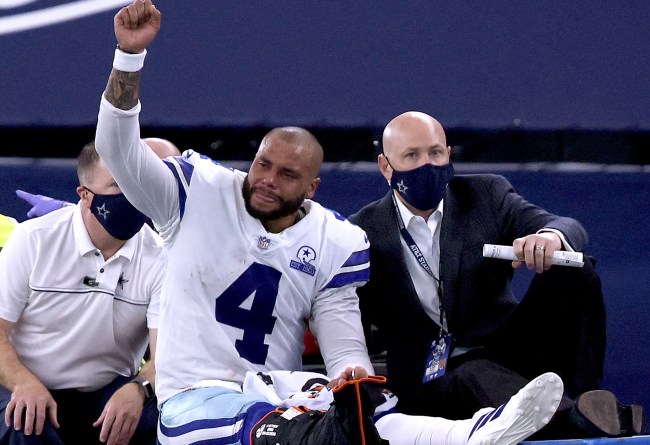 Prior to the start of last year’s NFL season, the Dallas Cowboys found themselves dealing with a ton of drama courtesy of running back Ezekiel Elliott, who went as far as threatening to sit out the entire season if the team refused to give him the new contract he felt he deserved. Jerry Jones played hardball for as long as he possibly could, but when everything was said and done, he acquiesced and the two sides agreed to a deal that made him the highest-paid running back in the NFL.

Elliott is arguably the team’s franchise player but he faces some fairly stiff competition thanks to Dak Prescott, who has established himself as a formidable force in the pocket in recent years. He also felt he’d earn the right to renegotiate the terms of his contract ahead of the last season of his current deal but found himself engaged in a stalemate, as both sides never really managed to come close to seeing eye to eye.

As a result, the quarterback entered the season with a bit of a chip on his shoulder and with some serious motivation to prove he’s indeed worth what he claimed he was over the spring and summer. Sadly, he saw his campaign come to an abrupt end over the weekend after suffering a devastating ankle injury in the third quarter of Sunday’s game against the Giants that led to him undergoing surgery that all but assures his season has come to a close.

This obviously takes away any of the leverage Prescott may have been able to amass if he’d managed to pull off a stellar season and people quickly tore into Jerry Jones for putting him in a much less desirable position than he would’ve been in if the Cowboys owner had been willing to give him the same courtesy he gave Elliott.

It didn’t take long for Jones to issue a statement concerning the development where he voiced his support for the QB and cryptically said he was looking forward to him returning to a leadership role in the future—although he did so while strategically (and, considering the situation, wisely) declining to explicitly address if that would come in the form of a new contract (as he could theoretically be alluding to him advising Andy Dalton when he’s healthy enough to do so).

Now, another member of the Dallas front office has chimed in, as ESPN reports executive vice president (and owner’s son) Stephen Jones addressed the situation during a radio appearance and implied the team’s plans going forward still heavily revolve around Prescott, saying:

“He’s our future. He’s special. If anyone can overcome anything, it would be Dak. This is something that our doctors feel good that he’ll overcome and come back better than ever.

He’s our heartbeat. Just to lose him, just really just kills you in terms of deep down. For him, you hurt for everything that he stands for and I think we’re still in shock. But certainly Dak is such a warrior. He’s been through a lot. He’s always overcome it and this is going to be no exception.

He’s going to get in there and do what he needs to do, I’m sure. Obviously everybody’s prayers are with him. He should be able to do everything you need to do to rehab and come back ready to go. It’s just a very difficult setback for him and for us. It’s something that we feel great about him totally overcoming and be ready to go next year.”

It’s no secret that the elder Jones prides himself on having the final say in every personnel decision the franchise makes, so while the younger one may have made it clear they intend to bring him back next year, only time will tell if negotiations will go a bit more smoothly the second time around.