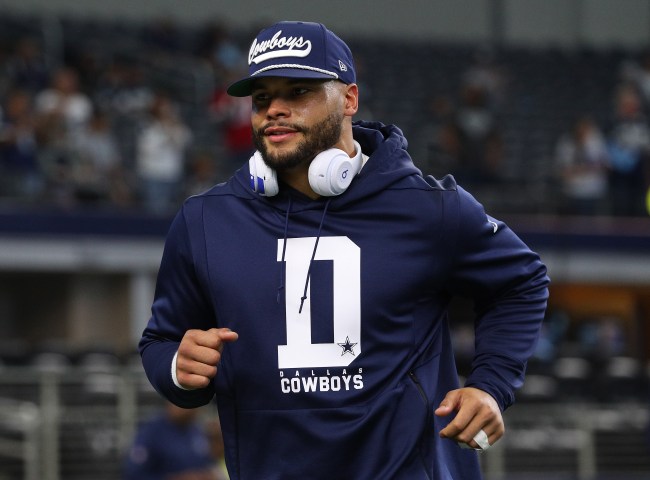 The Dallas Cowboys are trying their best to sign Dak Prescott to a multi-year deal before next Thursday’s franchise tag deadline but they have yet to come to an agreement.

On Friday Calvin Watkins of the Dallas Morning News, reported the Cowboys met with Prescott’s agent and made a huge offer that was reportedly worth $33 million a year with $105 million guaranteed.

“Cowboys officials have met with the agents of quarterback Dak Prescott and wide receiver Amari Cooper a second time since the end of the NFL scouting combine, a source said.

For the first time in the offseason, team officials met with the two high-profile free agents at the NFL scouting combine last week. The Cowboys talked with Prescott’s agent, Todd France, either in person or by phone twice since the end of the 2019 season.

A source said the Cowboys offered Prescott an average salary of $33 million with a guaranteed contract of $105 million.

ESPN’s Todd Archer is now reporting that Dak turned down the offer and the Cowboys have now sent a new proposal in hopes to sign the franchise QB before next Thursday’s deadline.

The Cowboys have sent a new proposal to Dak Prescott's agent in hopes of kick-starting discussions that lead to a multiyear agreement, according to a source.

Sources have said the Cowboys had an offer worth $33 million per season and more than $100 million guaranteed on the table. The complete structure of the contract was not known, but it was not enough to get Prescott to sign, although the Cowboys thought they were close on an extension early last season.

With the deadline to use the franchise tag coming Thursday, the Dallas Cowboys have sent a new proposal to the agent of Dak Prescott in hopes of kick-starting earnest discussions that lead to a multiyear agreement, according to a source.

The Internet could not believe that Dak turned down another huge offer from the Cowboys.

Dak turned down an average salary of $33 million with $105 million guaranteed?! 😂 pic.twitter.com/QvTx9Ltq6t

And he just turned this down???? Who tf Dak think he is 😂😭 https://t.co/bGHFcDvHhK

Dak turned this down??
This guy thinks he’s Patrick Mahomes or something https://t.co/QHWqzGW10K