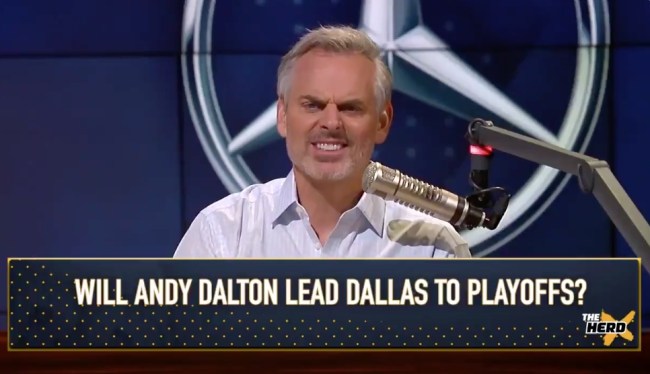 Dak Prescott suffered a gruesome injury last Sunday against the Giants that ended his season. As impactful of an injury it was, life in the NFL goes on, and for the Cowboys, their season now falls on the shoulders of Andy Dalton.

When Dalton, who is from Texas, signed a one-year deal with Dallas in the offseason, many were left scratching their head, but this exact scenario is why he landed with the Cowboys. Now, it’s his turn to show the Cowboys and the rest of the league that he still has what it takes to be a starting quarterback in the NFL.

The shoes he’s having to fill, however, are massive. Not only do Cowboys fans adore Prescott, but he was also having an incredible season from a statistical standpoint. While Dallas has gotten off to a lackluster 2-3 start this season, those struggles certainly didn’t fall on Prescott’s shoulders, Dallas’ defense is just that bad.

Having said that, Colin Cowherd is under the impression that there really isn’t any gap between Prescott’s abilities and Dalton’s abilities. He broke down Dalton’s numbers of the past and compared them to what Prescott has been able to do in his career during a segment on Thursday.

“I just want to remind you, the first four years of the NFL, Dak and Andy Dalton, they’re the same dude.”

"The idea that there's this massive gap. There really isn't." — @ColinCowherd pic.twitter.com/Uz4R6H3KvY