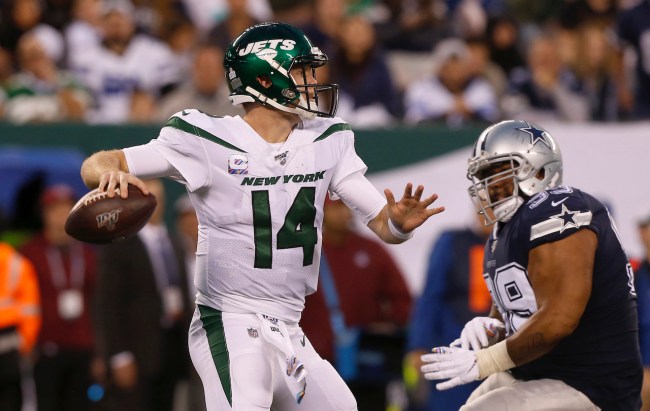 Sam Darnold currently plays for the New York Jets, who are, arguably, the most dysfunctional franchise in the NFL. The Dallas Cowboys are, for all intents and purposes, not much better than the Jets when it comes to organizational leadership — despite the prestige that “America’s Team” has because of their past and/or Jerry Jones. With Dallas clearly in need of a quarterback after watching the debacle that was Andy Dalton on Monday Night Football, could Darnold find himself going from one inept franchise to another? Maybe…

The idea was floated out into the Twitterverse by some site called Football Perspective, which, admittedly, I know absolutely nothing about. Yet, here we are, talking about Sam Darnold potentially joining Dallas as a last-ditched Hail Mary to salvage the season following the devastating Dak Prescott injury.

I expect the Darnold to Dallas rumors to heat up this week. Cowboys are still favorites to win the division and Jerry isn't going to just sit around. Jets are all in on the tank, and Darnold's market value is higher now than in March.

A 2nd should do the trick.

I don’t want to laugh out loud at the suggestion from Football Perspective, but, sheesh, how can you not at least chuckle? Has Sam Darnold shown anything to anybody to suggest he’s worth a 2nd round pick right now? Absolutely not. In the four games he’s started this NFL season, the guy has thrown for just 792 yards with 3 touchdowns and 4 interceptions, and has the 29th-ranked QBR at 46.3. If Dallas is looking for that kind of trash, they might just want to stick with Dalton.

I get it: Darnold is a sexy name because of his pedigree as the former USC quarterback who became a first round pick in 2018, but it seems just a little bit outrageous to think he’s the savior for any ball club right now — especially for a 2nd round pick. And based off of the reactions from NFL fans on Twitter, I’m not the only person who found the rumored trade horrendous AF.

That would be beyond foolish of Dallas

If Dallas does this, their managerial negligence will reach new heights

Absolutely not. You don’t trade a good draft pick for a one year replacement. We need as many picks as we can get to fill defensive needs.

This is a bad football perspective lol

Jerry Jones loves style more than substance, so, who knows, maybe I’m wrong and the Dallas owner falls in love with the idea of Sam Darnold in a Cowboys uniform. If that happens, I’ll bite my tongue and formally apologize to the good people at Football Perspective for their rumor being accurate. I just don’t foresee that happening.

If Dallas wants to try and save its season and try to win the terrible NFC East, it’s a fact that they need to make a move at quarterback. But Sam Darnold isn’t the answer. Somebody who might be worth a look? How about Ryan Fitzpatrick, who just found himself benched in favor of Tua Tagovailoa on the Miami Dolphins. Now that’s something every Cowboys fan should want to see — because who the hell doesn’t love a little Fitzmagic in their lives?