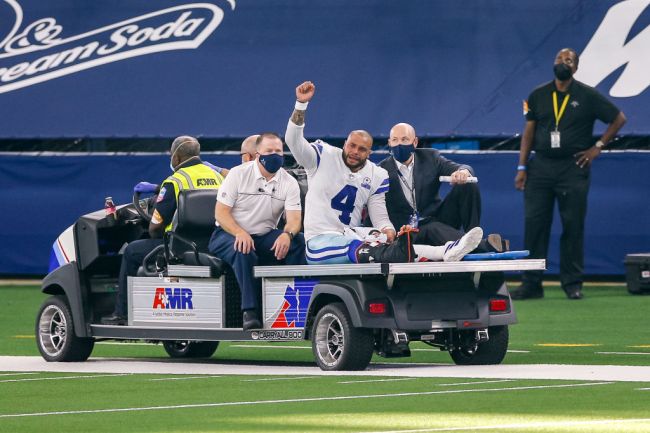 However, if a deal doesn’t get done between the beloved quarterback and the team, the Cowboys are prepared to slap the franchise tag on Prescott in 2021.

Jason LaConfora is reporting that Jerry Jones is prepared to tag quarterback Dak Prescott again in 2021, according to numerous sources with knowledge of the situation.

The Cowboys continue to view Prescott as their quarterback of the future, and he was among the most prolific passers in the NFL this season prior to his injury.

While the sides could not come to terms on a long-term extension last offseason, there remains ample reasons to anticipate them doing so in 2021, albeit with a salary that will exceed $40M a season when the quarterback is healthy.

The Cowboys already had to budget for the potential of carrying Prescott in 2021 at roughly $38M in cash (and against the cap) in the event he played out next season on a second straight franchise tag.

The injury has not altered their willingness to do that, sources said, and that remains a near certainty come February when the period to apply the tag is scheduled to begin.

Prescott wouldn’t be the first quarterback or player to play consecutive seasons with the franchise tag. Kirk Cousins played for Washington in 2016 and 2017 under the franchise tag before leaving to sign with the Minnesota Vikings.

Prescott leaving Dallas probably won’t happen since owner Jerry Jones sees the quarterback as the future of the organization.

Jones has a deep affinity for Prescott, which was unwavering despite a negotiating process that was far from smooth, and views him as an essential player in his quest to win another Lombardi Trophy.

The quarterback was poised to exceed his totals from a standout 2019 season, and it’s difficult for people in that organization who know the owner well to consider a future for the franchise that does not include Prescott under center.

LaConfora reported that the tag is “viewed as an inevitability” within the organization.

Until Prescott recovers, the Cowboys will attempt to win in an awful NFC East with Andy Dalton, a quarterback who some feel isn’t much of a step down from Prescott.