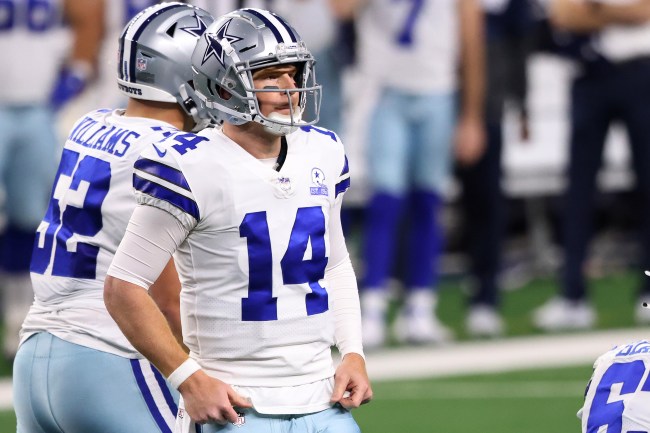 Andy Dalton is off to a rough start in his first game starting for injured QB Dak Prescott.

On the Cowboys’ first offensive possession against the Cardinals on Monday Night, Dalton threw an absolutely terrible pass that should have been intercepted but Cardinals defender Jordan Hicks somehow dropped the ball.

Andy Dalton throws the worst pass in NFL history and it's somehow not intercepted pic.twitter.com/kmcdI8cd19

Dalton was immediately roasted for the pass by Cowboys fans.

WTF was that decision

How does he not pick that off.

“Andy Dalton will fill in nicely while Dak is out.” pic.twitter.com/hBADdgdOHs

Well, it doesn't look like much has changed with Ginger Boy Wonder Andy Dalton: Almost threw a pick six on his first pass of the game. 🤣🤣🤣🤣 #AZvsDAL

Earlier this week I said Andy Dalton would be the least of the #Cowboys worries moving forward, it’s early, but … pic.twitter.com/YL0xR9Ctvr

Who is the backup behind Andy Dalton?

Woof. This is hard to watch.

Remember. Actual people who get paid to talk about the NFL said Andy Dalton would be better for the Cowboys than Dak Prescott.

It’s going to be a long year for Cowboys’ fans.