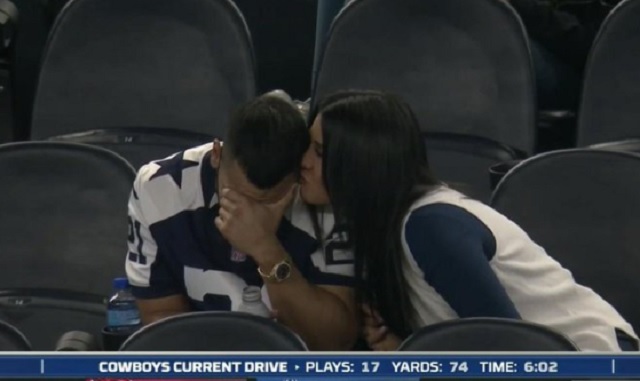 The Dallas Cowboys got crushed on Monday Night football and one Cowboys fan in the stands was taking the loss extremely hard.

In the fourth quarter of the Cowboys-Cardinals game on Monday Night, the ESPN cameras panned to the crowd and found one extremely depressed Cowboys fan being comforted by his girlfriend.

Of course, the depressed Cowboys fan instantly became a meme on Twitter.

Cowboys fans, every year before the season: “This is our year…we dem boyzzzzz 19-0 incoming baby!!!”

Cowboys fans, every year during the season: pic.twitter.com/TzwqSiCsAW

Imagine buying tickets for you and your girl just to see them get their ass whooped… feels bad man. #NextYearIsOurYear #DC4L https://t.co/vnrDGhYpDM

when you bet this months mortgage on the cowboys and you figuring out a way to tell your wife LMFAOOOOOOO https://t.co/5gXbpdpW6c

Once Andy Dalton is named the starter on your team you should be getting stressed like this. https://t.co/QPPALkUTR0

Me, whenever the McRib goes away. https://t.co/hOnix7WKR0