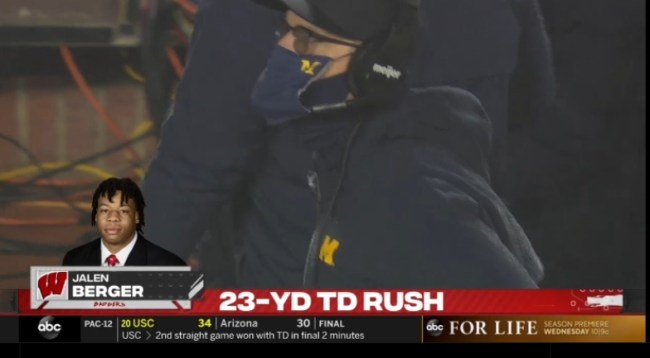 Another week and another disappointing showing by the Michigan Wolverines, led by head coach Jim Harbaugh, who is taking the blame for the team’s performance this season.

On Saturday night Michigan struggled mightily against Wisconsin where the game was pretty much over when the Badgers took a 28-0 lead at halftime that felt insurmountable considering the Wolverines did nothing on both sides of the field.

“Michigan fans are shocked and DISGUSTED”

The 28-point deficit is tied for the largest by a CFB or NFL team coached by Jim Harbaugh. pic.twitter.com/qhLbEmyRrT

Michigan continued to get crushed throughout the night and the game ended with a 49-11 score.

College football fans were extremely about their disapproval of Harbaugh’s coaching after another embarrassing showing.

Does Harbaugh even finish the season? This is embarrassing for Michigan football.

I don’t see a scenario in which Jim Harbaugh is bck at Michigan. These are his recruited players and it’s turned into a disaster.

I believe this is jim harbaugh’s last supper as a wolverine pic.twitter.com/EqMcfHRZDw