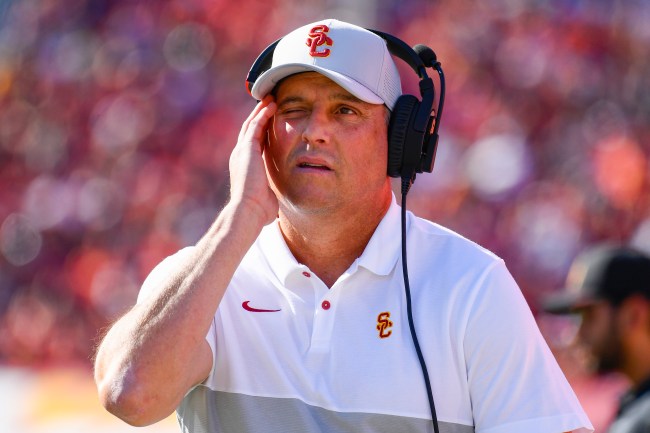 USC football has long-been one of the most proud and successful college football programs in the nation. Makes sense, too, since the Trojans have boasted all-time greats like Marcus Allen, Reggie Bush, Matt Leinart, Ronnie Lott and OJ Simpson, among plenty of others, which have helped capture national titles and All-American honors.

Problem is, USC football hasn’t exactly produced that caliber of player or results in the past few years, with the Trojans falling on pretty hard times since winning the Rose Bowl a couple of years ago when Sam Darnold guided them to a win over Penn State. Hell, the program hasn’t even won a national championship since 2004, and even that was vacated because of NCAA violations.

Needless to say, the USC football team doesn’t seem to be all that sexy to this generation of young players — despite being the “school of swag,” with ties to famous fans like Snoop Dogg and Will Ferrell. And if you need more proof of that, just look at where the Trojans sat on the national rankings leading up to today’s National Signing Day for early commits.

No, that’s not a photoshop, guys. Yes, USC football was really sandwiched between Temple and Georgia State on the national rankings from 247 Sports, proving just how bad things have gotten in LaLa Land. Fortunately, the Trojans got a commitment from 3-star recruit Tuli Tuipulotu, which pushed them “all the way up” to No. 76 on the rankings list, but, still… pathetic.

USC football might have a rich tradition, but because of the things the school has operated lately, it doesn’t seem like many top recruits are all that interested in playing for the Trojans. This news is pretty shocking to college football fans, who couldn’t help but tweet their amazement over where USC falls on the national rankings.

You really should be able to put together a top-20 recruiting class at USC without even trying. Just say "OK guys, let us know if you wanna play here. Cool." That USC is in the 70s should be impossible

My God, what has happened. https://t.co/eXoq4htsI9

Florida State exemption in the high twenties is understandable

But oh my God, USC we are watching the fall of Rome.

Everyone knows it’s hard to convince 18 year olds to move to LA for 4 years. Real disadvantage

Who knows what the answer is, but, getting a high-profile coach with a track record of success is probably a good start. Current head coach Clay Helton isn’t that, and, unfortunately, unless he turns things around to get USC football back to relevance — or he’s replaced and another coach accomplishes such a task — no top player in the country will want to sign with them; even if it is always warm and sunny in Southern California.