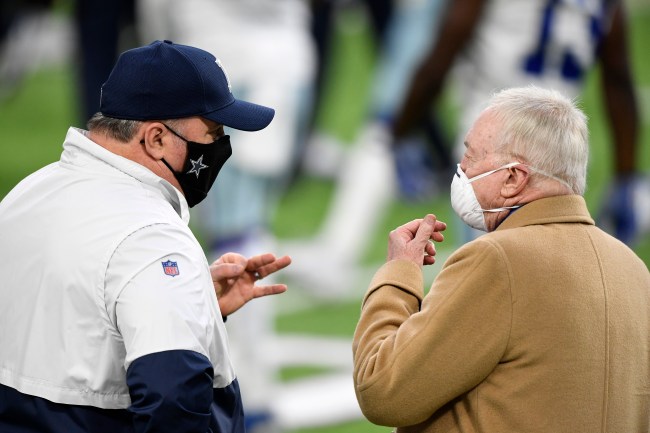 During Thursday night’s Thanksgiving Day game between Washington and Dallas, the Cowboys were mocked by fans for running a bizarre fake punt play on 4th-and-10 while inside their own 20-yard-line early in the fourth quarter while down only four points.

Mike McCarthy might have pulled off the worst fake punt of the year in the NFL. #DallasCowboys pic.twitter.com/1ro5BffH9k

After the game, head coach Mike McCarthy defended himself by saying that the fake punt was a “solid play call”.

Cowboys coach Mike McCarthy on decision to fake a punt on fourth-and-10 at own 24: “You won’t get anywhere if you’re thinking about negatives all the time. Obviously, it was a solid play call. It’s a good play design.”

“We had one-on-one on the perimeter,”. “I think everybody saw what happened on the play. Those are plays that you look to create opportunities and it was a good play call.”

During his weekly radio show appearance, team owner Jerry Jones backed his coaches by saying the team needed to do something drastic to help out the defense.

Cowboys fans still weren’t happy about the play call even after the team’s comments.

Just doubling down on stupidity. Nothing worse than a coach who can’t call out his own mistakes. He was clearly shielded from looking stupid by Rodgers for so many years. https://t.co/IvLsjDFLu5

I take back every positive thing I’ve said about McCarthy. What an idiot lol https://t.co/imzVq52rVH

It wasn't a solid play call and it was bad play design. I feel like someone at some point should have pointed this out to him. https://t.co/ViL0fgsbaW

Stupid play-call at the wrong moment of the game. Took us right out the game.
I’m ready to end the McCarthy project simply because the staff keeps making the same mistakes over and over https://t.co/FOnIY8O7vI

Okay let's go over a couple of things.

Nothing about this says go for it on 4th down. Nothing screams fake punt about this. I'm aware a there was an open Cowboy but didnt pass it. https://t.co/cgnrv0oPmJ pic.twitter.com/xfUIbRBMRf