Cowboys Leave Dak Prescott Out Of New Hype Video, Director Of Media Says It Was Just An ‘Oversight’ 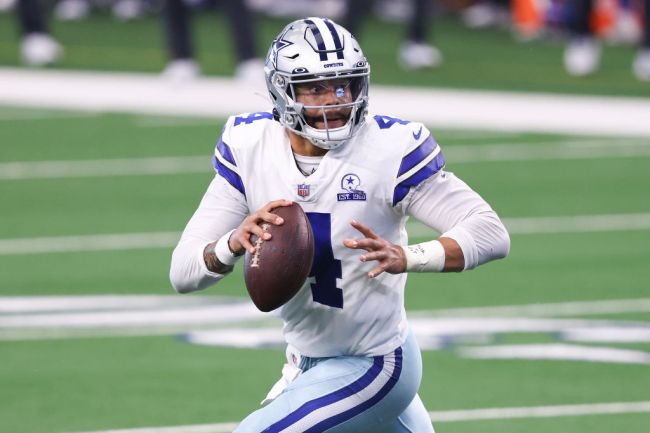 Just after the Tampa Bay Buccaneers won Super Bowl LV, the Dallas Cowboys shared a cliche hype video claiming that ‘next season starts now.’ The video shows plays from different eras and features almost every notable player on the Dallas roster; the keyword here is almost.

Somehow, Dallas’ media team put together a hype video that didn’t show Dak Prescott one single time. It’s a pretty bold strategy given the situation the franchise and the quarterback find themselves in at the moment with Prescott’s future up in the air.

“This was simply an oversight that should have been caught and corrected by us. Anyone who’s making it seem like Cowboys’ decision makers use social media videos to make statements doesn’t understand or take the time to understand how it all works. Trust me, there’s no story here,” the team’s senior director of media & programming, Derek Eagleton, shared on Twitter.

Sure, the video is only 32 seconds long, but you’d think having a Prescott highlight in there would be the first thing that comes to mind when putting together the video. This is like the Brooklyn Nets producing a hype video showing Kevin Durant and Kyrie Irving, but leaving James Harden out of it.

Prescott and the Cowboys weren’t able to come to terms on a new contract last offseason so the former Mississippi State standout played on the franchise tag at $31.4 million. The Cowboys could go that same route, play him on the franchise tag again in 2021, that would see him get a pay increase to $37.7 million. Prescott reportedly turned down a five-year, $175 million contract offer prior to the 2020 season.

Whether or not Dallas was trying to send a message by excluding Prescott or it did in fact forget to include its quarterback in a hype video – which would be extremely odd – we’ll likely never know. Regardless of what happened, you can’t blame Cowboys fans and Prescott supporters to be concerned about the situation.