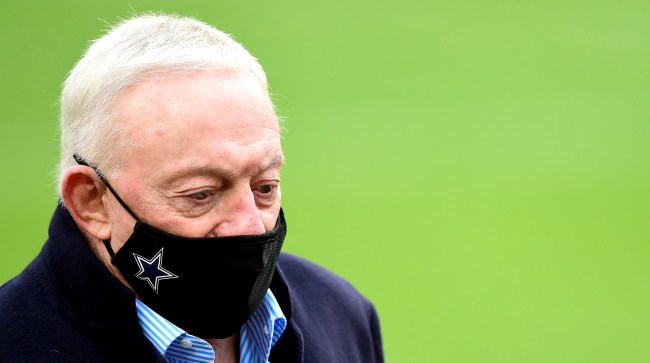 Last week, Dallas Cowboys owner Jerry Jones stated that he has no intention of relieving himself of the general manager duties for America’s Team.

The 78-year-old Jones said, “When you work for yourself, there’s no firing him. You gotta change him. And he’s gotta change the direction he’s going. I’ve worked all my life for myself, but I’ve had to change directions many times. So, I will change. I can change.”

Ummm… Jerry doesn’t have to fire himself. He owns the Cowboys. That’s his job. The title of general manager of an NFL team does not come with ownership. Just ask, oh, all the other NFL team owners that have a general manager running football operations. That list would include EVERY OTHER NFL TEAM OWNER IN THE LEAGUE, except for Mike Brown in Cincinnati, and we all know how that’s worked out for him (they haven’t won a playoff game since 1990).

Rather than just take a wild guess at whether or not Jerry Jones should “fire himself” as Cowboys general manager, Mike Sando of The Athletic went though all 32 GM’s in the NFL and ranked them based on who has won Super Bowls in the role while laying out won-lost records, playoff success, draft histories and more.

He also broke them out by tenure with one group being those GMs with 10 years or more experience, those with 5 to 9 years at the helm, and the newbies.

Take a wild guess which two NFL general managers with 10 or more years experience are ranked at the very bottom?

If you said Jerry Jones and Mike Brown, give yourself a pat on the back.

On the surface, that doesn’t sound all that terrible. Plus, Jerry has done pretty well in the draft over the years, picking 42 Pro Bowlers in 32 years.

The problem for Jerry arises when you compare him to the other NFL general managers with 10 or more years experience.

Of course, there are worse general managers in the NFL, just not with as much tenure as Jones.

Les Snead of the Rams, Steve Keim of the Cardinals, Tom Telesco of the Chargers, Ryan Pace of the Bears, Bob Quinn of the Lions, Jason Licht of the Buccaneers, and Dave Caldwell of the Jaguars are all behind Jones when comes to winning percentage among GMs with 5 to 9 years on the job.

On the flip side, Jon Robinson of the Titans, Rick Spielman of the Vikings, and Howie Roseman of the Eagles have better won-loss records than Jerry among that group.

Throw in Brett Veach’s .754 winning percentage with the Chiefs, Brian Gutekunst’s .656 with the Packers, and Brandon Beane’s .574 with the Bills, and Jones falls to 13th overall.

The good news for Cowboys fans is, he will have to retire sometime. Right?