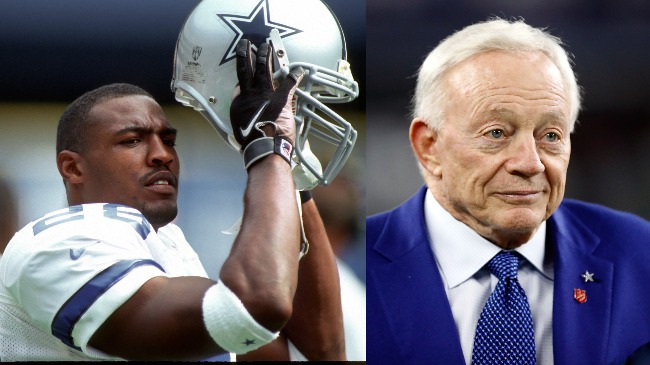 Outside of the COVID-19 attendance title, the Dallas Cowboys haven’t been a serious Super Bowl contender since the introduction of carpenter jeans.

Yet, in 2015, as Jerry’s franchise was celebrating it’s 20 year Super Bowl drought, the Dallas Cowboys were became the first sports team to be valued at $4 billion, making it the most valuable sports team in the world. Three years later, the franchise would break its own record in becoming the first team to reach $5 billion.

The Cowboys ability to stay relevant over the stench of on-field failure is nothing short of a miracle, and the direct product of the business and marketing genius of its three decade long owner, Jerry Jones.

We spoke with Darren Woodson, 3x Super Bowl champion and one of the greatest Cowboys ever, on our Endless Hustle Podcast presented by Boston Market, and the former safety opened up about his reverence for Jerry in every aspect of life that isn’t general managing a football team.

3x Super Bowl champ & Cowboys legend @darrenwoodson28 calls Jerry Jones "the greatest owner of all-time" in any sport & a guy whose generosity behind the scenes is unmatched.

“In my opinion, Jerry Jones is the greatest owner of all-time, regardless of the sport. This team has been irrelevant for 26 years, yet they are the number one franchise in the world. Because that man understands business. He understands how to market. The NFL is not where it is today without Jerry Jones pushing the envelope as far as sponsorships in the early 90s with Pepsi and Nike, and almost getting sued by the league.

While Woodson said he’s “not giving him a lot of credit” as a general manager, he claimed it was hard to criticize Jerry during his 14-year stint at ESPN because the man gives his full self to his players.

“It’s hard to criticize Jerry, even after all the lapses, after the product he put on the field. Because I know the man’s heart. I know the man who when guys got in trouble, real trouble, that were former players or guys who ran into some financial issues or needed some help, he was the first.

I’m on the board of a foundation and they were running short of money and didn’t meet the need and I was at the same table with Jerry and his wife and watched Jerry lean over and tell the executive director of that foundation, ‘I got it covered. Don’t tell anyone.’ I sat there and watched that. That is the man we’re talking about.

And I know he takes a lot of criticism, but as a man it’s hard to criticize him because he’s been there. And it didn’t matter if you were black, white, purple, he’s going to protect his family and friends.”

Woodson’s sentiment was supported by Ryan Leaf, who spent no longer than a cup of coffee with the Cowboys, but claims Jerry would have walked through fire for him even at a time when Ryan wouldn’t do the same for himself.

Check out our entire interview with the charismatic Darren Woodson below: